As one of the first OEMs, the Volkswagen Group has decided to significantly improve the environmental balance of its marine transport fleet by using two vessels powered by LNG (liquefied natural gas) on routes between Europe and North America. The two planned charter vessels from Siem Car Carriers are a genuine milestone on the way to Eco-friendlier marine transport. In addition, the Group intends to transfer vehicle and material transport in Europe increasingly from trucks to lower-emission means of transport such as ships in the future.

Wolfram Thomas, Head of Group Production, said: “The Volkswagen Group is shouldering its responsibility for the environment. This not only applies to our cars but also to our production and logistics. We are pooling all our efforts to improve environmental compatibility in Logistics under the term Green Logistics. By commissioning the two LNG-powered freighters for the route between Europe and North America, Volkswagen Group Logistics is forging ahead with environmentally compatible, resource-efficient transport.“ The use of LNG  powered roll on/roll off car carriers on other routes is currently being considered. 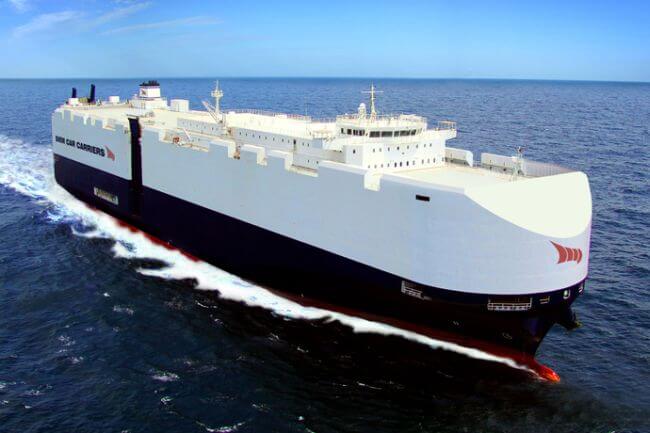 The two LNG-powered vessels, with a length of about 200 meters and a width of about 36 meters, have a capacity of about 4,500 vehicles. The car carriers, equipped with a 3,000 m³ LNG tank installed below deck, will therefore have a comparable capacity to conventional transatlantic freighters. Both ships will feature a 12,600 kW engine developed by MAN Diesel & Turbo.

The use of the two LNG-powered freighters for vehicle logistics across the North Atlantic will reduce emissions per ship and year by up to 25% in the case of CO2, up to 30% in the case of NOx, and up to 60% in the case of particulate matters (PM), while SOx emissions will be cut by as much as 100%. Emissions will be further reduced by the use of a highly advanced dual-fuel marine engine with direct injection and exhaust gas treatment. The engines used by SIEM Car Carriers will therefore be more environmentally compatible than previous engines.

Thomas Zernechel, Head of Group Logistics, explains: “Compared with other means of transport, marine shipping is one of the most efficient possibilities. Volkswagen Group Logistics already transports half of the vehicles produced by sea. We are continuously working on the optimization of our marine transport systems. The chartered vessels on which a decision has already been taken are the first milestone.” He adds: “The possibility of changing other vehicle transport vessels chartered by Volkswagen over to LNG operation will depend on the availability of the necessary infrastructure. Apart from LNG as an alternative fuel, we are also working on other projects which will continuously make our logistics processes more environmentally compatible.”

The contract partner for the LNG vessels is the shipper SIEM Car Carriers AS, which submitted a proposal that was convincing in economic and environmental terms. The two LNG ships will replace two of the nine conventional freighters powered by heavy fuel oil from 2019 onwards. These are used exclusively for the Volkswagen Group in a round trip scheme across the North Atlantic serving the markets of Canada, the USA, Mexico and Europe.

“We are pleased to have taken on board a partner in Volkswagen Group Logistics with whom we can pursue this innovative, future-oriented approach to roll-on/roll-of transport for the first time. The use of LNG-powered car carriers not only makes marine transport of this type more environmentally compatible but will also make the entire operation significantly more efficient in the long term “, says Kenneth Ross CEO of Siem Car Carriers AS.

The Volkswagen Group already joined the Clean Shipping Network at the beginning of 2014 and was the first German automaker to use this index for assessing the environmental impact of marine transport. Apart from chemicals and waste disposal, the assessment criteria also include emissions of carbon dioxide (CO2), nitrogen oxides (NOx), particulate emissions (PM) and sulfur oxides (SOx). The Volkswagen Group is working steadily on alternative, environmentally compatible transport possibilities, not only for vehicle logistics, but also for material logistics. Since the end of 2015, material from Turkey for the Autoeuropa plant in Portugal has been shipped from Izmir to Lisbon by sea. The transfer from road haulage to marine transport on this route cuts annual CO2 emissions by 240 tons. At the same time, the cost to the company is reduced.

“By bundling consignments in an intelligent way, we can use means of transport such as ships and railways, which conserve resources, instead of trucks and further improve the environmental compatibility of our vehicle and material logistics,” says Thomas Zernechel.