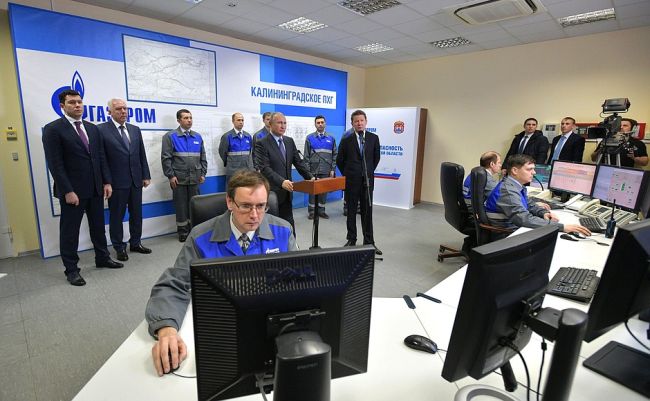 The vessel converts LNG delivered by sea back to natural gas, which is then distributed to consumers or pumped into the Kaliningrad underground gas storage facility, a sealed natural gas reservoir buried deep in rock salt sediment.

The first such project carried out by Gazprom in Russia, this alternative gas supply option for Kaliningrad Region is to increase the region’s energy security, given its unique location.

We are in the control room of the Kaliningrad underground gas storage facility.

The floating storage regasification platform is currently moored at the receiving terminal; that platform will convert LNG into gas to pump into the underground facility and to supply to consumers in Kaliningrad Region. 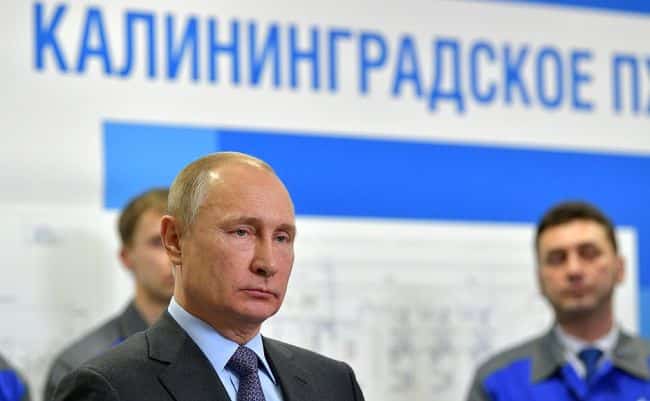 We can now see representatives of the team that will continue to operate this facility, standing on the breakwater at the receiving terminal.

Mr Putin, we have completed the commissioning procedures. The terminal is ready to begin operations and distribute the first gas delivered to Kaliningrad Region by sea for local consumers and for pumping into the UGS facility.

President of Russia Vladimir Putin: Mr Miller, colleagues – both present here and those now at sea.

I would like to address everyone who worked on this project.

We are all certainly well aware that delivering a primary energy resource such as natural gas over such a distance by pipeline makes better economic sense and is a cheaper option. But for us, for Kaliningrad Region, the project will most likely be a backup, and will substantially minimise, or more precisely, mitigate all transit risks.

In this regard, I would like to remind you that we agreed with the Government – and the Government has been so instructed – to prepare proposals (I know that they have been generally formulated and I am waiting for a report on this matter) on how to avoid a situation where the price difference between pipeline gas and liquefied gas supplied to Kaliningrad becomes an additional burden on the end users. I repeat, the proposals have been drafted, and I hope to hear a report on this matter shortly.

I would like to thank Gazprom staff – engineers, designers, workers, and builders – everyone who made this project possible. As a reminder, I issued corresponding instructions back in 2013, after which work began, and the project was completed in a relatively short time.

As I have already said, it is hard to overestimate the importance of this terminal for the region’s energy security and consolidation of the local energy base, given the geographical location of Kaliningrad Region first and foremost.

The terminal’s capacity, 2.7 billion cubic metres of gas per year, almost fully covers the needs of the region, guarantees a reliable alternative for its gas supply, and reduces dependence on transit gas supplies. Not even reduces, eliminates. Moreover, as I have already said, the new terminal and its infrastructure can completely cover the region’s gas needs if necessary, without the use of gas pipelines running across neighbouring countries.

I will add that the new terminal was built using the most advanced technologies and complies with all environmental safety requirements.

Of particular note is the construction of the Kaliningrad underground gas storage facility. This unique UGS facility will ensure reliable and stable gas supply to local consumers, especially in autumn and winter.

By the way, in recent years, we have paid a lot of attention to the energy supply and energy security of this region, also in connection with EU plans to withdraw the Baltic states from the Russian energy ring. Strictly speaking, that is their business; additional taxpayer money will be invested in this.

But today, Kaliningrad Region is already completely autonomous and can resolve all its energy supply and consumption problems, not only of the primary resource, but also electricity. The system is ready, as its successful operation this autumn and winter made this very clear.

We have devoted considerable attention to the development of power grids; two power plants have already come online, the third one is ready to launch in the first quarter, and the fourth will be introduced in 2020. Overall, Kaliningrad will have 970 MW of additional capacity. This fully meets the region’s growing needs.

I would like once again to express my gratitude to all the energy workers, Gazprom employees in this case, and to wish all of us continued success. Thank you for your work.

Alexei Miller: Mr President, we have the Director General and employees of Gazprom UGS standing by.

I ask them to report on the project’s main specifications. Proceed, please.

Over 2,000 workers from Gazprom and contractor organisations were involved in the construction of the breakwater and the regasification terminal where we have gathered.

The breakwater and the terminal are located 5 kilometres from the shore, where the sea depth is 19 metres, so that the Floating Storage and Regasification Unit (FSRU) the Marshal Vasilevsky can anchor here. The breakwater is a unique structure designed to protect the FSRU from heavy storms, which happen here quite often. Then terminal has been built of high-strength concrete on 177 40-metre long piles and has the equipment for receiving gas from the FSRU.

You can see that two loading arms are connected to the Marshal Vasilevsky. From the terminal, gas is pumped through a 13-km pipeline to Kaliningrad Region’s gas transportation system and on to the end users and the underground gas storage facility.

Mr President, this concludes my report.

Alexei Miller: Mr President, we have captain of the Marshal Vasilevsky FSRU on the line. He will tell us about the main specifications of the unit.

The Marshal Vasilevsky is Russia’s first floating storage and regasification unit (FSRU) that both transports liquefied natural gas and converts LNG back to natural gas right on board the vessel.

The Marshal Vasilevsky FSRU is the first vessel of the Arc4 ice class. It has been registered with the Russian Maritime Register of Shipping and is flying the Russian flag.

The FSRU has anchored at the terminal in Kaliningrad and is ready to start regasifying the LNG and to supply the converted gas to the shore.

This concludes my report.

Alexei Miller: Mr President, the captain stands ready for your command to start supplying gas to the consumers and to the Kaliningrad storage facility.

Dmitry Yarymbash: Mr President, I am giving the order from the regasification and loading centre to start the delivery of gas to the terminal.

All systems are operating in normal mode. Gas is being delivered to the shore.

Alexei Miller: Mr President, the terminal has begun operating. We are pumping the first batch of LNG that has been delivered to Kaliningrad Region by sea to the region’s consumers and the Kaliningrad storage facility.

Mr President, you can see on the map that the Minsk-Vilnius-Kaunas-Kaliningrad trunk pipeline has been turned off and that gas is being delivered to Kaliningrad Region via the marine terminal. Its daily capacity is 13.2 million cubic metres, which means that its annual capacity is sufficient to fully meet the region’s current and future gas requirements.

Gazprom is implementing a comprehensive gas supply programme in Kaliningrad Region. We are expanding the Kaliningrad underground gas storage facility and building a gas liquefaction plant near the Portovaya compressor station in Leningrad Region, where the Nord Stream 1 pipeline begins, specifically for Kaliningrad Region.

Mr President, we have fulfilled the task you set us – to create a reliable sea-based gas supply system for Kaliningrad Region.

I would like to thank you once again for what you have achieved, for this excellent result, and to wish you every success in the future.

I with you a merry Christmas and a happy New Year.

IMO: Preparation Is The Key In Ballast Water Management
Development On World’s First Electric And Autonomous Container Vessel Paused Due To Pandemic

Oil Tanker Attacked By Libyan Warplanes On Fire, Three Wounded
Want to share your tips and advice? Got questions? Visit the community forum to ask questions, get answers, meet people, and share your tips!