The Virginia-class attack submarine USS John Warner (SSN 785) was commissioned during a ceremony attended by more than 2,500 in its future homeport of Naval Station Norfolk, Aug. 1, 2015.

Proudly displaying its motto “On a Mission to Defend Freedom,” the ship is the 12th Virginia-class attack submarine to join the Navy’s operating fleet.

The ship’s namesake is John Warner, a five-term U.S. Senator from Virginia who also served as 61st Secretary of the Navy from 1972 to 1974. His wife Jeanne is the ship’s sponsor.

Warner is also the only Secretary of the Navy who served as both an enlisted man and an officer, in both the Navy and the Marine Corps. As a Sailor during World War II he served as an electronics technician third-class petty officer, and in the Korean War he was a captain with the Marine Corps 1st Marine Air Wing serving as a Ground Communications Officer.

“Let them know of your presence and your determination to defend freedom,” said Warner, as he addressed the audience and the ship’s crew. “Defend the sea lanes of the world which are the very arteries of international commerce. Manned by our submarines, our surface ships, and naval aircraft, we are carefully working to keep those sea lanes open – not just for us but for all.” 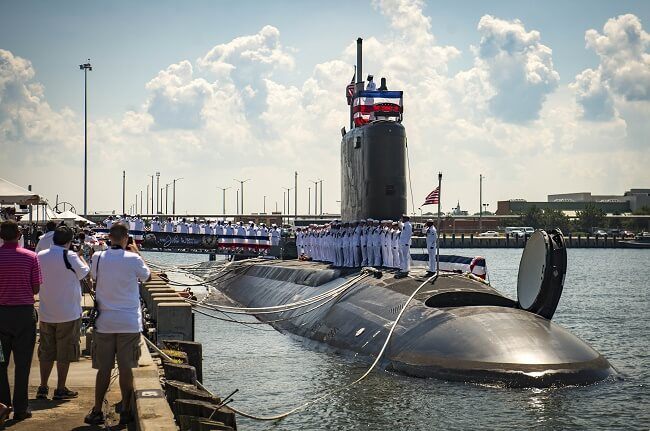 The keynote speaker for the commissioning ceremony was Adm. Jonathan Greenert, Chief of Naval Operations.

“You are at a formative stage as a crew,” said Vice Adm. Michael Connor, Commander, Submarine Forces. “If you approach your important duties with the same commitment as your namesake there is no doubt that the USS John Warner will enjoy a lifetime of future accomplishments that parallels the future trajectory of Petty Officer Third Class John Warner.”

As the most modern and sophisticated attack submarine in the world, the submarine can operate in both littoral and deep ocean environments and presents combatant commanders with a broad and unique range of operational capabilities. John Warner is a flexible, multi-mission platform designed to carry out the seven core competencies of the submarine force: anti-submarine warfare; anti-surface warfare; delivery of special operations forces; strike warfare; irregular warfare; intelligence, surveillance and reconnaissance; and mine warfare.

The submarine is 377 feet long, has a 34-foot beam, and will be able to dive to depths greater than 800 feet and operate at speeds in excess of 25 knots submerged. It will operate for 33 years without ever refueling.

“The commissioning of the USS John Warner marks the beginning of what is expected to be 40 years of distinguished service for this great submarine – a fitting tribute to a man who served his nation for so long as a Sailor, a Marine, a United States Senator and, as one of my most esteemed predecessors as Secretary of the Navy,” said Secretary of the Navy Ray Mabus. “This ceremony is not only a celebration of a man who dedicated so much of his life to his country and to the Department of the Navy, but also a reminder of the partnership our Navy shares with the shipbuilding industry in Senator Warner’s home state of Virginia and the continued success of the Virginia-class attack submarine program.”