To make ships more eco-efficient, engineers have been working with alternative fuels. A Norwegian engineer is currently pursuing a new approach: With VindskipTM, he has designed a cargo ship that is powered by wind and gas. Software developed by Fraunhofer researchers will ensure an optimum use of the available wind energy at any time.

International shipping is transporting 90 percent of all goods on earth. Running on heavy fuel oil freighters contribute to pollution. The International Maritime Organization (IMO) wants to reduce the environmental impact of ocean liners. One of the measures: Starting from 2020, ships will only be allowed to use fuel containing maximum 0.1 percent sulfur in their fuel in certain areas. However, the higher-quality fuel with less sulfur is more expensive than the heavy fuel oil which is currently used. Shipping companies are thus facing a major challenge in reducing their fuel costs while complying with the emission guidelines.

A new way of reducing fuel consumption, emissions and bunker expenses is being pursued by the Norwegian engineer Terje Lade, managing director of the company Lade AS: With VindskipTM he has designed a type of ship that does not use heavy fuel oil but utilizes wind for propulsion. The highlight: The hull of the freighter serves as a wing sail. On the high seas, VindskipTM will benefit from free-blowing wind making it very energy efficient. 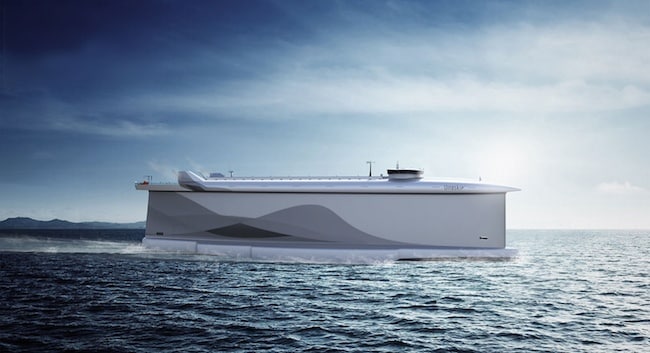 The hull of the cargo ship VindskipTM acts as a large wing sail.

For low-wind passages, in order to maneuver the ship on the open sea while also maintaining a constant speed, it is equipped with an environmentally friendly and cost-effective propulsion machinery running on liquefied natural gas (LNG). With the combination of wind and liquefied natural gas as an alternative fuel to heavy fuel oil, the fuel consumption is estimated to be only 60 percent of a reference ship on average. Carbone dioxide emissions are reduced by 80 percent, according to calculations by the Norwegian company.

For efficient operation, it is critical that the available wind energy is used in the best possible way. In order to calculate the optimal sailing route, researchers from Fraunhofer Center for Maritime Logistics and Services CML, a division of Fraunhofer Institute for Material Flow and Logistics IML, have developed a customized weather routing module for VindskipTM. Considering meteorological data the software for the new ship type uses a navigation algorithm to calculate a route with the optimum angle to the wind for maximum effect of the design. “With our weather routing module the best route can be calculated in order to consume as little fuel as possible. As a result costs are reduced. After all, bunker expenses account for the largest part of the total costs in the shipping industry,” says Laura Walther, researcher at CML in Hamburg. For the complex calculations, the researcher and her team apply numerous parameters, such as aero- and hydrodynamic data as well as weather forecasts from the meteorological services, such as wind speed and wave height.

So how is it possible that the VindskipTM is being pulled forward? “At angles close to headwind the wind generates a force in the ship’s direction. The ship is pulled forward. Since the hull is shaped like a symmetrical air foil, the oblique wind on the opposite side – leeward – has to travel a longer distance. This causes a vacuum at the windward side that pulls the ship forward,” explains VindskipTM patent-holder Lade. This makes the freighter move at speeds of up to 18 to 19 knots, hence just as fast as conventionally powered ships. Due to its very low fuel consumption, Vindskip™ can utilize liquefied natural gas (LNG) as fuel and still be capable – in the worst case – of 70 days of steaming between bunkering. Thus, it can meet all of today’s and tomorrow’s challenges with regards to fuel economy and emission control.

The researchers from CML are continually developing the weather routing tool further; the first version has been available since mid-December 2014. By the end of January 2015, the software will be handed over to the company Lade AS. Ship types that are particularly relevant to the VindskipTM-design, for which the weather routing module is developed, are ships like car and truck carriers, big ferries, container ships and LNG carriers. Terje Lade forecasts that the freighter will set sail as soon as 2019. First, the ship model has to pass numerous tests in a marine research model tank – also called a towing tank by experts. Tests in wind tunnels have already been completed successfully.