With recent type approval of an 81-meter-high evacuation system, VIKING has answered the needs of offshore fixed and jack-up rigs to handle extreme heights.

“The system’s certified evacuation capacity is 146 people in just 10 minutes, comfortably beating the threshold required by maritime authorities, even from such an extreme height,” says Kristian Ellertsen, Norway-based Offshore Technical Manager for the company. 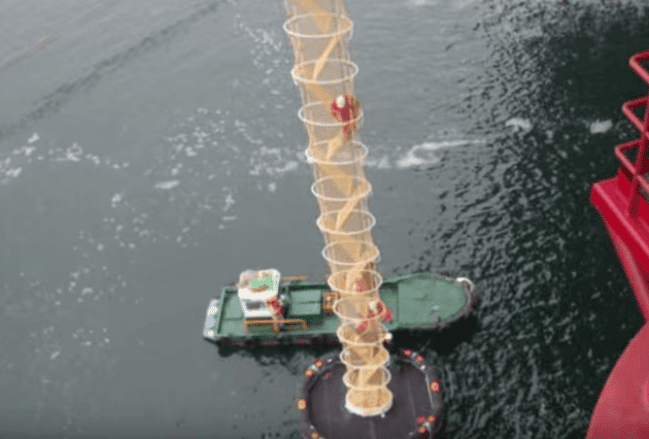 With rig sizes increasing, and evacuation heights exceeding what is possible with enclosed davits and lifeboats, chute-based evacuation solutions have become increasingly important. Designing and building them, however, demands significant know-how and experience.

In 2013, Noble Corporation plc, one of the world’s the largest offshore drilling contractors, was in the early planning stage of its CJ70 jack-up rig for delivery in 2016. The company required an evacuation system that could cope with the rig’s unprecedented height, but the previous record for such a system, held by VIKING, was ‘only’ 64 meters.

“Developing something of this height was not easy,” says Kristian Ellertsen and continues: ”In fact, just finding an offshore structure of the right height for testing was difficult. But VIKING has more than 35 years of experience with mass evacuation systems, so even though we were facing a demanding schedule, developing, testing and manufacturing a never-before-seen system in record time, we were confident the effort would succeed. And, in any case, we always enjoy a challenge.”

The new 81-meter system reasserts VIKING’s lead in the field of evacuation systems. Already, two systems have been installed on the Noble Lloyd Noble jack-up rig due to be completed during 2016 at the Jurong shipyard in Singapore and destined to operate in the Norwegian sector of the North Sea.