DSAm will carry out the contract one vessel at a time. The Viking Idi was the first of the six to arrive at the yard in late December 2015. Sister ships Viking Idun, Viking Kvasir, Viking Kara, Viking Hlin and Viking Gullveig will follow consecutively. With each vessel spending an average of 10-11 days at the yard, the entire contract will be completed by early March. 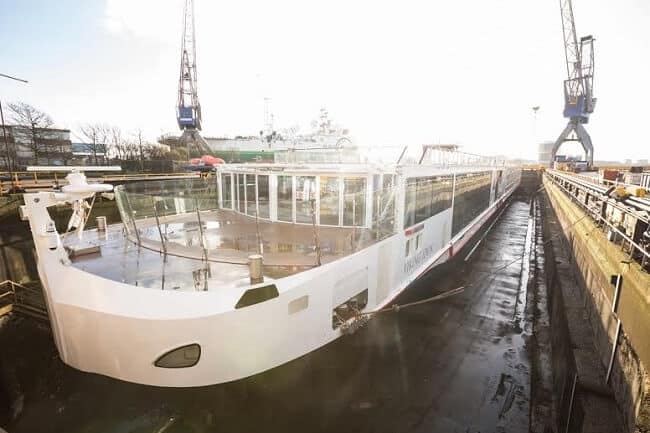 The primary scope of work for all six longships comprises stern frame modifications necessary to prevent propeller damage during turning manoeuvres in canals and other narrow waterways. The solution is to install an additional steel construction reaching from the seawater inlet chest all the way to the stern. To reduce the time spent at the yard, Damen is prefabricating the steel components in advance.

The DSAm team will also carry out any necessary maintenance on the vessels whilst they have them in drydock. For example, the Viking Idi needed a replacement port propeller. Furthermore, the vertical sides of her hull and the seawater inlet chest box coolers were high-pressure washed and cleaned.

Viking’s river and ocean cruise catalogue offers worldwide destinations that include Europe, Russia, China, Southeast Asia and Egypt. Specifically for the European market, Amsterdam is a key location as it  is a principal stopping and starting point for the company’s European river cruise itineraries. The DSAm site, almost next to the Amsterdam cruise terminal, is the ideal location to perform routine, as well as priority, dockings for Viking‘s large fleet. The proximity means that the cruise operator can benefit from a minimal deviation period and the associated cost savings that this entails.

“We have got to know Viking’s river cruise vessels quite well over the last couple of years, completing five identical stern modifications to part of their fleet already,“ comments DSAm Project Manager Arnold Bregman. Efficient planning of the docking, as well as the prefabrication work, is essential, he says: “With six vessels one after the other, we will be undocking the completed vessel and docking the next one on the same day. They’ll all be in our number one drydock which is perfect for river cruise vessels. We are right on schedule and proud to be continuing our relationship with Viking River Cruises.”