A Royal Dutch Shell PLC drilling rig that will search for oil in the Arctic left its temporary base in Seattle on Monday for the trip north to Alaska as dozens of activists in kayaks tried to stop it, authorities said.

Live television showed the rig being towed out of its terminal at the Port of Seattle with kayakers fanning out in an arc as it moved into the Puget Sound.

Twenty-five people were detained by the Coast Guard for violating a safety zone around the vessel and were fined $500 each, Coast Guard spokesman George Degener said.

The rig paused at Bainbridge Island, west of Seattle, and several tweets indicated it had beached. Degener said the reports were incorrect and the rig was changing towing configuration.

Seattle City Council member Mike O’Brien was among the activists who paddled out to oppose Shell’s plans to resume drilling for fossil fuels in the Arctic, one of the most ecologically sensitive regions in the world. 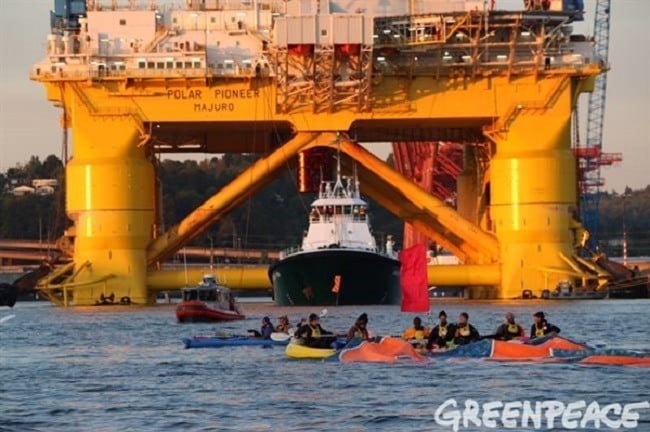 Environmental groups say looking for oil in the remote Arctic could lead to a disaster in an area that helps regulate the global climate because of its vast layers of sea ice.

Activists also say an oil spill would be nearly impossible to handle in Arctic conditions. Shell has told federal officials that its would be able to remove 90 to 95 percent of any oil spill.

The rig left Seattle on Monday even as the oil major waited on final permits from the federal government to return to the waters off Alaska after a mishap-filled 2012 season.

Shell spokesman Curtis Smith said the rig was on schedule and a second drilling vessel would depart for Alaska in coming weeks.

“We remain committed to operating in a safe, environmentally responsible manner and look forward to exploring our Chukchi leases in the weeks to come,” he said in an email.

Activists in Alaska have also vowed to keep pressure on the company ahead of its return to the Chukchi and Beaufort Seas, home to whales, walrus and polar bears.

The Coast Guard said it will remain with the vessel as it moves through the Strait of Juan de Fuca, then will leave it once it hits the open waters of the Pacific Ocean.

Oil Exploration Blocked In Watershed By Supreme Court Of Canada