The massive fire caused by an explosion onboard the USS Bonhomme Richard continues to stay ablaze for a second day while docked at home-port San Diego shipyard. Over 100 firefighters are currently working together to combat the fire that has now spread upward and onto other structures on the vessel. 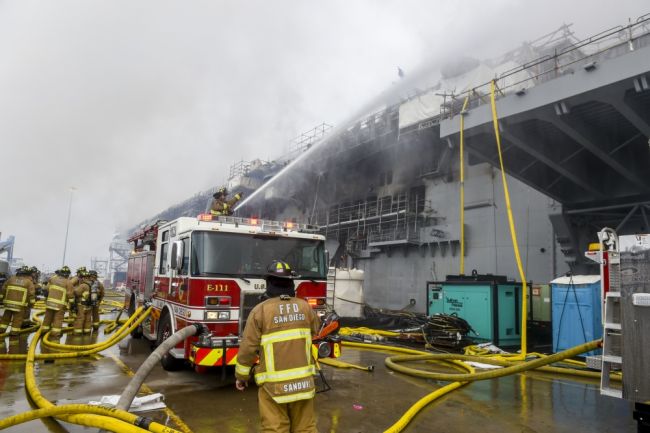 While the cause of the fire is still unknown, rear Admiral Philip Sobeck has suggested the possibility of it beginning in the deep V storage cargo area. The explosion occurred two decks away from the area that stores a million gallons of fuel, on Sunday, 12th July 2020.

All of this while the ship underwent routine maintenance with about 160 crew members on board.

At present, firefighters from the SDFD and 400 sailors are working together to contain the stubborn fire while helicopters are deployed to water from above. Fireboats are on the perimeter to stream water to help cool the outside. Blasting water into the ship from the shore has been discontinued owing to concerns of disturbing the vessel’s buoyancy. 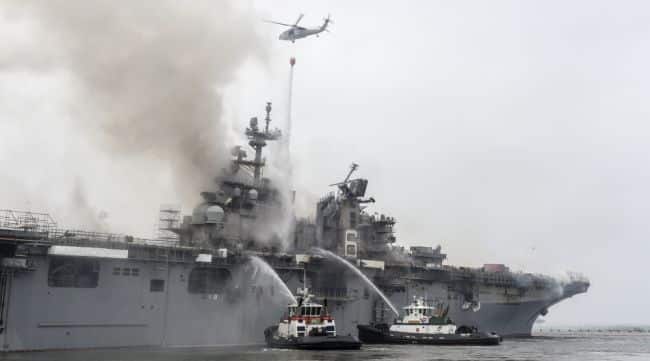 The San Diego Union-Tribune newspaper has reported that the smoke and fumes are polluting the air throughout the city. 36 sailors and 23 civilians, along with 17 firefighters have been admitted and treated for minor injuries and evaluations.

While Sobeck remains optimistic about future repair of the vessel, assessment of burn damages has revealed burns through the skin of the ship, triwall boxes (large storage boxes) and more, as the team progresses to look for the center of eruption.

Sailors and Federal Firefighters continue to provide assistance in combating a fire onboard #USSBonhommeRichard at Naval Base #SanDiego, July 13 … https://t.co/5zjpEeVdCU #Navy pic.twitter.com/myQ6WGcnqZ

“Right now the priority is to get the fire out so that we can take a complete assessment,” said Sobeck, while another Naval Surface Force spokesman has assured that “significant progress” has been made by the crew in its effort to salvage the ship.

Helicopters from Helicopter Sea Combat Squadron 3 combat a fire aboard the amphibious assault ship #USSBonhommeRichard (LHD 6). On the morning of July 12, a fire was reported aboard the ship while it was moored pier side at Naval Base San Diego. pic.twitter.com/CAzxhgw6Gh

Tags: Fire on board us navy