You are here: Home › Shipping News › Video: Explosion In Iran Sets Fire On 7 Ships At Port, No Casualties Reported
TwitterFacebookLinkedInPinterestBuffer

In what seems to be the latest target of serial explosions and fires around Iran, 7 ships at the Bushehr Port caught fire on Wednesday, 15th July 2020 causing to address the possibility of enemy sabotage strongly. The cause of the fire has not been determined.

Images published by the IRNA news agency show how the fire led to dense black smoke blanketing the skies, with fighters trying to curb the clouds of smoke at the shipyard that is located at 720km on the south of Tehran. No deaths have been reported so far. The current explosion has followed the string of fires in sensitive sites across the country since the end of June.

On 26th June, an explosion close to the Parchin military and the weapon development base, on the east of Tehran was determined to have been an accident due to a gas leak. On June 30th a similar gas-leak explosion at a medical clinic in Tehran (north) killed 19 people. Prior to the fire at the shipyard, there had been an incident at the Natanz underground nuclear facility on July 2 and one at an aluminum factory in Lamerd. 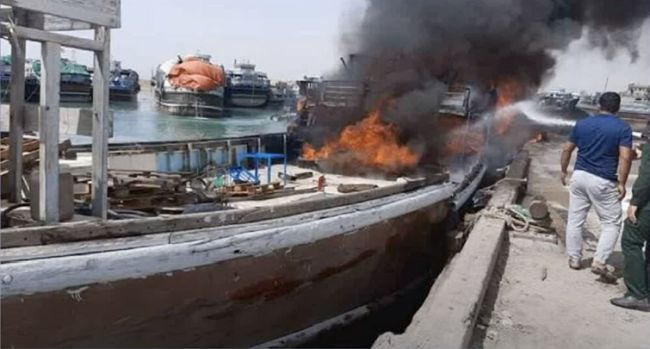 Iran’s underground nuclear facility has been on the radar of the Western Intelligence and the IAEA’s (International Atomic Energy Agency by UN) in the suspicion of having coordinated a nuclear arms programme, later halted in 2003. Tehran on the other hand, calls the facility the cynosure of an enrichment programme for “peaceful purposes” and denying claims of seeking nuclear weapons.

Iranian officials believe in the possibility of a cyber-sabotage and have warned to retaliate against any nation if proven right. Following Donald trump’s move of pulling the US out of the Iran Nuclear deal in 2018, state news agency IRNA too, in their article suggested the possibility of enemy attacks with references to Israel and the US, which wasn’t voiced directly.

Avigdor Lieberman, Defence minister of Israel has reportedly commented about his country “not necessarily behind every mysterious incident in Iran”, in regard to the current unrest.

?Iran says at least 7 ships have been burnt after a large fire at the #Bushehr port in southern #Iran.

“The cause of the fire is unknown”?