At about 10.45am AEST this morning, Sunday 24 May, the Australian Maritime Safety Authority (AMSA) received notification that a container ship had lost cargo overboard off the NSW coast.

Just after 6.10am, the Singapore flagged container ship APL England experienced a temporary loss of propulsion during heavy seas about 73 kilometres south east of Sydney.

The ship was en route from China to Australia. 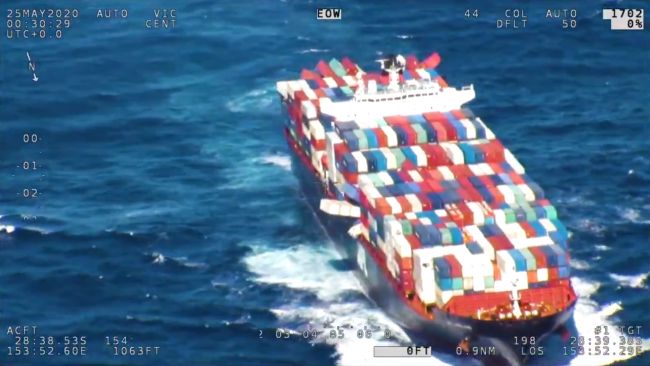 The ship’s power was restored within a few minutes but during this time the ship reported that it was rolling heavily, causing container stacks to collapse and several containers to fall overboard.

The Master of the APL England has reported that 40 containers were lost overboard, 74 containers have been damaged. Six containers are reported to be protruding from starboard side, and three from the port side of the ship.

AMSA intends to task one our challenger jets to proceed to the area to look for containers and debris and to inspect the ship for any signs of damage or pollution.

The APL England is currently located to the north of Sydney and is continuing to head north to minimise the impact of the heavy weather.

At this stage it is unknown whether there will be any shoreline impacts associated with this incident and AMSA is working with NSW Maritime to monitor the situation and develop an appropriate response.

The Australian Transport Safety Bureau has been notified.

AMSA is responding to an incident involving the loss of about 40 containers overboard from the Singapore-flagged container ship APL England off the New South Wales coastline. 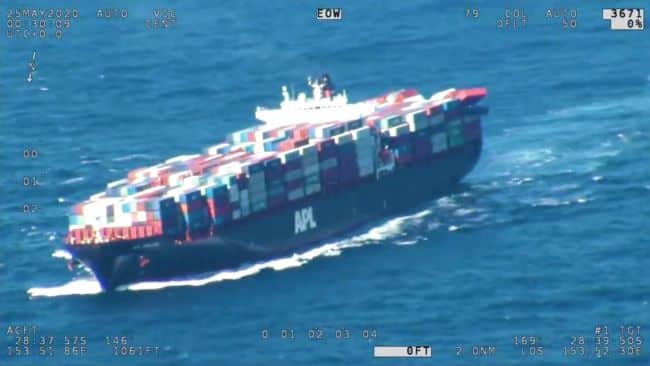 The incident happened just after 6.10am AEST yesterday (Sunday 24 May) when the ship experienced a temporary loss of propulsion during heavy seas about 73 kilometres south-east of Sydney.

At the time, the ship was on a journey from Ningbo, China to Melbourne, Australia.

The ship’s power was restored within a few minutes but during this time the ship reported that it was rolling heavily, causing container stacks to collapse and 40 containers to fall overboard in waters about 2km deep.

The Master of the APL England has reported that an additional 74 containers have been damaged and remain collapsed on the deck of the ship, while a further six containers are reported to be protruding from the starboard side and three containers from the port side of the ship.

The ship has turned around and is now heading toward Brisbane, Queensland. AMSA will be inspecting the ship, once the destination Port has been confirmed, upon its arrival.

AMSA’s Challenger jet was tasked overnight to look for containers and debris in the water and inspect the ship for any signs of damage or pollution. Some containers were spotted in the water however efforts were hampered by bad weather and poor visibility. The ship has not reported any damage to the hull.

The Challenger has returned to the ship today, currently located 20km east of Byron Bay, to conduct another search for containers and debris and reinspect the ship.

AMSA is conducting extensive drift modelling today and working with New South Wales Maritime about potential shoreline impacts and Maritime Safety Queensland around potential use of Brisbane Port. Initial modelling from last night suggested that if there was any floating containers or debris it would likely wash up to the north of Sydney.

At this stage no sightings of containers or debris along the shoreline have been reported and more extensive drift modelling will be conducted today factoring in the Challenger’s observations in better weather.

The Australian Transport Safety Bureau has been notified and has confirmed it will investigate the incident.

This is not the first incident involving container losses from APL England. The APL England previously lost 37 containers in the Great Australian Bight in August 2016 due to heavy rolling in rough seas. While the vessel was under totally different management at that time, this is another example of the need for crews and operators to ensure cargo is carried, and ships are operated, to prevent this sort of pollution of the marine environment.

Shippers On The Ropes As Long-Term Contracted Rates Hit Highs And Ever Given Chaos Continues: Xeneta Container Rates Alert