A 4-year-old girl sitting on an inflatable unicorn found herself getting drifted into the sea owing to strong currents in the Gulf of Corinth, Greece, on Monday, 24th Aug 2020. The girl was spotted half a mile away from the shore by a ferry that happened to pass by.

The girl was earlier seen playing with her father at the beach when the currents took her away. Bystanders tried to help but couldn’t seem to catch up. It is unclear how she drifted away even though under parental supervision. However, people watching said that the parents panicked and contacted the rescue authorities immediately.

With the harbormaster’s help, maritime officials notified all nearby vessels. 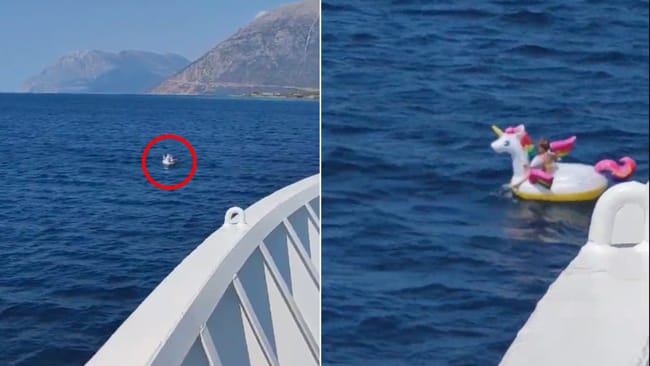 The Salamina Warrior Ferry (Salaminomachos) that was en route Rio spotted a little speck in the sea that later turned out to be the little stranded girl. Capt. Grigoris Karnesis then got closer to the girl and placed his ship slowly as he didn’t want the ripples to affect the ship or the buoy to sink.

Photos and videos show the little girl sitting in her unicorn amidst the blue sea. As the ferry gets closer, the girl is seen clinging the plastic blow-up toy.

The captain lowered the bow ramp and plucked the girl and her unicorn safely out of the water. She was later reunited with her parents.