USS Peleliu (LHA 5) returned to Naval Base San Diego Dec. 24 from a six-month deployment to the Western Pacific.

Upon return, the ship will make preparations to decommission in March after 34 years of service, 17 deployments and more than a million miles transited, and as the last remaining Tarawa-class amphibious assault ship.

While deployed, the ARG conducted security and stability operations and exercises throughout the Indo-Asia-Pacific region to include Amphibious Landing Exercise (PHIBLEX) 15 and other maritime cooperation exercises with partner nations. 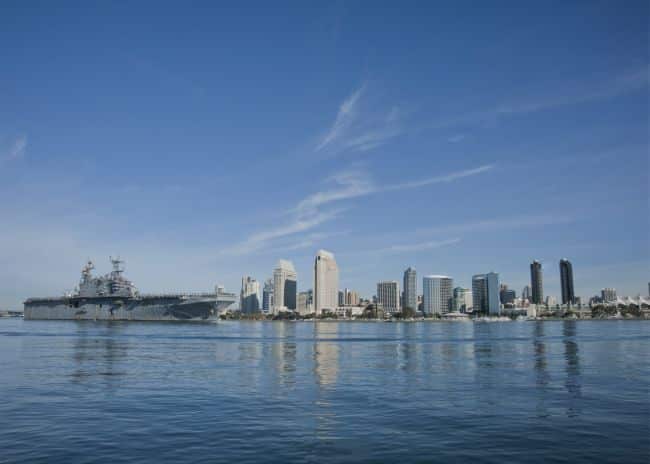 “Peleliu and her crew performed superbly throughout the deployment, serving as our flagship for the Amphibious Readiness Group,” said Commodore Heidi Agle, commander, Amphibious Squadron Eleven. “I am proud to have served with such outstanding Sailors and Marines during the ship’s final deployment.”

U.S. Pacific Fleet announced in February that USS Green Bay (LPD 20) will be forward deployed to replace the decommissioned USS Denver (LPD 9) in Japan. Peleliu deployed to the Western Pacific to mitigate the gap in amphibious presence.

“Through community relations activities, Peleliu extended efforts to support strong relationships with both U.S.-based partners as well as regional allies and friends throughout the Western Pacific,” said Cmdr. Jack Carver, the ship’s chaplain. “They also offered our Sailors and Marines the opportunity to learn and develop an appreciation for the rich cultural heritage.”

Peleliu is named for the Battle of Peleliu during World War II where 1,256 Marines gave their lives to take Peleliu.

“The crew routinely stepped up and exceeded my expectations during this challenging final deployment and I know that would not have been possible without the enormous support of our families and friends back at home” said Capt. Paul Spedero, commanding officer of Peleliu. “I’m proud of this crew and their dedicated families.”

Joint, interagency and international relationships strengthen U.S. 3rd Fleet’s ability to respond to crises and protect the collective maritime interests of the U.S. and its allies and partners.

Members Of PEMA Meet For Cross-Industry Dialogue To Optimise Global Shipping Supply Chain
Want to share your tips and advice? Got questions? Visit the community forum to ask questions, get answers, meet people, and share your tips!