COMPTUEX is an exercise that tests a strike group’s ability to work and operate as one cohesive unit in a simulated real-world scenario based training environment. 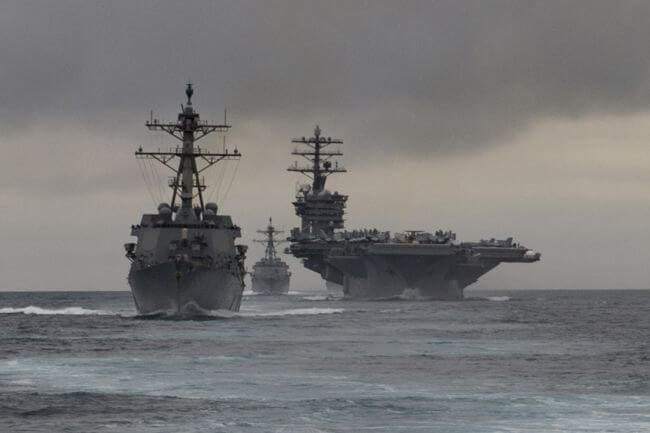 Nimitz was joined by CSG 11, to include Destroyer Squadron (DESRON) 9 and Carrier Air Wing (CVW) 11, to prove their operational capabilities prior to deploying.

Vice Adm. Nora Tyson, commander, U.S. 3rd Fleet, said COMPTUEX is designed to put a strike group through the highest level of training that we can possible give. This allows them to go forward around the world and do anything that our country would ask them to do.

Throughout the exercise, the strike group encountered an environment that mirrored, as closely as possible, what they may encounter while deployed in future areas of operation.

“Considering that the past five weeks have been the first time that the Nimitz Carrier Strike Group has trained together at sea in more than three years, we did extremely well,” said Commander, CSG 11, Rear Adm. Bill Byrne. “We did a lot of high velocity learning.”

Nimitz, during the COMPTUEX, became the first carrier strike group to implement the use of the Fleet Warfighting Training System Live, Virtual, Constructive (LVC) training concept. LVC allows for the synthetic virtual environment to be integrated with the live environment, providing a more comprehensive and realistic training environment. LVC can create scenarios that involve higher complexities and stress the strike group to its max capabilities, leading to more proficient strike groups and fighting forces while better preparing them for what they may encounter while deployed. The COMPTUEX was broken up into two separate phases.

Phase I closely followed a schedule of events (SOE) that acted as a training phase for Sailors and watchstanders. Phase II provided the strike group with a scenario that didn’t follow an SOE, and is more realistic.

“Some of it might be in a synthetic environment, some is live, but overall it is designed to really challenge the strike group,” said Tyson. “This is so that, from Rear Adm. Byrne, to the youngest Sailor on the deck plates, everyone feels confident that, if you have to go into any scenario where you are tested to the highest end of your capability, you will be able to comfortably go and succeed.”

The COMPTUEX challenged and trained the strike group on all levels including the Sailors on the deckplates.

“I believe the training was invaluable,” said Cryptologic Technician (Technical) 2nd Class Traci Allen, Combat Systems’ Electronic Warfare (EW) Module Supervisor, and a native of Chattanooga, Tenn. “We finally got the chance to work with our whole strike group and figure out our battle rhythm. The experiences we gained will follow us over the horizon when we take to open water. Nothing and no one can take that away from us.” Commander, CSG 15, Rear Adm. Ross Myers and his staff acted as the grading entity for the COMPTUEX. They observed the Sailors aboard Nimitz and throughout the strike group as they reacted to scenarios that they may face on deployment and determined their proficiency to operate in a real-world environment.

“CSG 15, our trainers and assessors, presented an enemy and warfighting environment that was both relevant and realistic,” said Byrne. “This is the best training scenario I’ve seen in my 30 years of working these types of battle problems. That sort of competitiveness, initiative, and toughness I saw across the strike group is exactly what the Chief of Naval Operations asks of us.”

With the completion of COMPTUEX, the Nimitz Carrier Strike Group is now fully certified to deploy later this year.

“We are going to be tested. We need to go forth confident that we will be competitive enough and that we will be tough enough to prevail. I have no doubt that Nimitz Strike Group is both,” said Byrne.