The U.S. guided-missile that was struck by a chemical tanker near the Straits of Malacca has arrived in Singapore. Photos released by the Navy show the extent of the damage to USS John McCain (DDG-56) as the ship pulled into Changi Naval Base. An oval indentation more than 20 feet wide and seven to eight feet high from the water line can be seen in the port side of the destroyer, suggesting the dimensions of the hole in the ship could be as large as 20 feet by 16 feet. McCain (DDG-56) collided with the Liberian-flagged chemical tanker Alnic MC around 5:24 a.m. on Monday, local time.

In contrast to the entrance of USS Fitzgerald (DDG-62) into Yokosuka, Japan in June, McCain his riding higher in the water, suggesting McCain may have taken on less water. 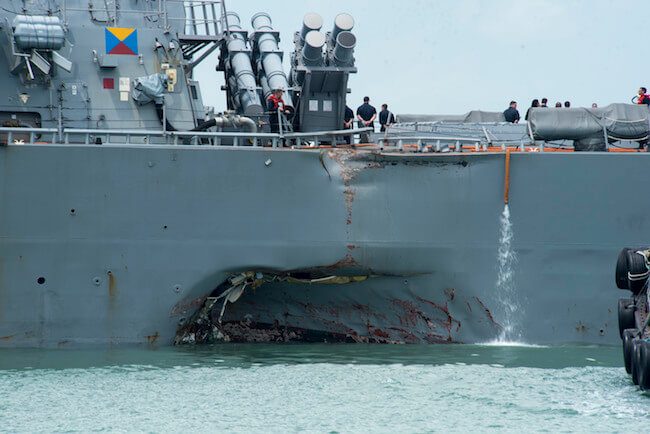 Still, “significant damage to the hull resulted in flooding to nearby compartments, including crew berthing, machinery, and communications rooms. Damage control efforts by the crew halted further flooding,” read a statement from the Navy.

Meanwhile, search and rescue efforts are underway for 10 sailors that are still missing following the early morning collision between McCain and the chemical tanker 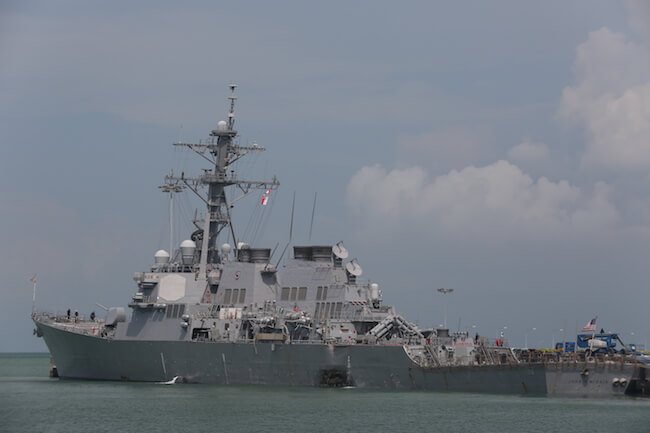 “Additionally, MH-60S helicopters and MV-22 Ospreys from the amphibious assault ship USS America (LHA 6) are in the area providing search and rescue assistance.”

Big deck amphibious warship USS America (LHA-6) has also arrived in Changi Naval Base to support the crew of McCain.

“While in Singapore, America will provide messing and berthing services to McCain crew members and to support damage control efforts on board,” read a statement from U.S. 7th Fleet.
“America will also support ongoing searches for 10 missing sailors. Ship Repair Facility divers are on scene as well to assess the damage to the hull.” 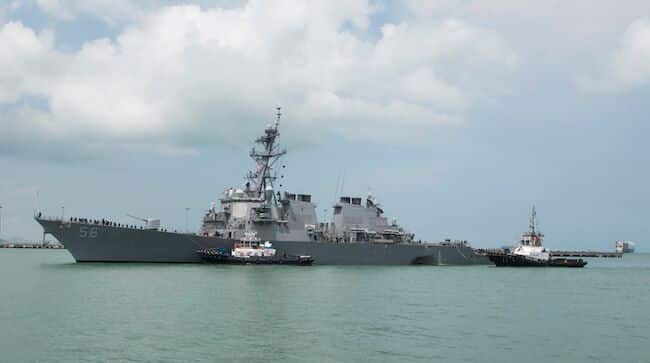 Earlier this month, McCain conducted a freedom of navigation operation past the Chinese artificial island on Mischief Reef.

Destroyer McCain is part of the U.S. forward-deployed naval forces based in Japan. The ship is named for the former U.S. Pacific Command Commander Adm. John S. McCain Jr.