The Coast Guard swung into full response mode as Hurricane Harvey made landfall on the Gulf Coast of Texas Aug. 25, 2017. And as responders encountered problems and devised solutions, some relayed the information via text message to Cmdr. Thomas “Andy” Howell, who heads the Coast Guard Innovation Program.

“The texts were essentially submissions to the Innovation Program by people who had lost access to the Coast Guard Network,” Howell said. “The next morning I spoke with the co-chairs of the Innovation Council about opening up an official outlet for folks to post their ideas.” 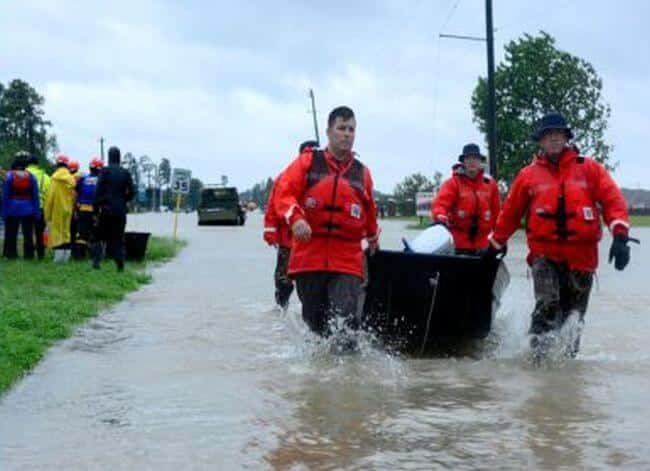 The Hurricane Lessons Learned challenge on the Coast Guard’s crowdsourcing platform, CG_Ideas@Work, was started as a way to preserve and institutionalize the wealth of lessons learned during hurricane response efforts. All Coast Guard personnel who participated in any of the response efforts are encouraged to share their observations, issues and ideas.

“We saw some remarkable initiative and problem-solving during recent hurricane response and recovery operations, from expanded use of social media to cloud-based asset reporting,” said Rear Adm. Joseph Vojvodich, Deputy Commandant for Mission Support and an Innovation Council co-chairman. “We want to rapidly capture and share those lessons and get the new ideas in front of decision makers while they are still fresh,” he said.

The Coast Guard routinely captures lessons learned as a way to improve its operations, but the CG_Ideas@Work challenge offers one distinct advantage: “Our crowdsourcing platform not only provides a place to submit ideas, but also to collaborate on them,” Howell said. “Everyone from non-rates to admirals can discuss ideas.”

Speed is also an advantage. “Catching the ideas when they’re fresh and raw preserves their integrity,” Howell said.

The forum also provides transparency, which helps with strategic alignment among programs. And on the most practical level, cellular towers remained resilient when other communication networks went down during Hurricane Harvey. “Members were able to fire submissions to the campaign even if they couldn’t use their Coast Guard email accounts,” Howell said.

The challenge was initiated to capture lessons learned from Hurricane Harvey, but as the U.S. and its territories continued to be battered by subsequent storms, it was expanded to include responses to Irma, Jose and Maria. The current plan is to keep the challenge open indefinitely. “Ideas are still flowing in,” Howell said.

The submissions do more than just provide a forum for discussion. “The Commandant’s Direction says we need to become an organization capable of continuous learning, so it’s important that the innovations and adaptations that made this response successful are institutionalized,” Howell said. Ideas shared through the Hurricane Lessons Learned challenge are immediately shared with the responsible program. Many will be considered as potential projects for next year’s Research, Development, Test and Evaluation Project Portfolio.

“The Hurricane Lessons Learned campaign provides critical input to the RDT&E and Innovation programs, as we address the highest priority needs for the service and work to facilitate solutions to challenges the operators face every day,” said Wendy Chaves, program manager for the Coast Guard’s RDT&E Program (CG-926).

The Innovation Council will also oversee a report that discusses the major themes arising out of the effort. Most importantly: all ideas will be given to the Office of Contingency Preparedness and Exercise Policy (CG-CPE) as material for the official Incident Command System (ICS) lessons learned process. “It’s vital that we not lapse back to the status quo after the dust settles,” Howell said.

The Innovation Program launched its web-based crowdsourcing tool in June 2015; it was renamed CG_Ideas@Work in September 2016. The site is open to all Coast Guard personnel – active duty, Reserve, civilian and Auxiliary members and can be accessed at any time, on any device. As of Sept. 30, 2017, there were 5,501 registered users, approximately 6 percent of the total workforce. Howell’s goal is to reach at least 10 percent of the workforce, which would be around 8,800 users.

“Getting the word out is extremely difficult,” Howell said. “We’ve blogged, tweeted, emailed, and even sent flag letters. I hope everyone will have a look and tell their shipmates to as well.”

Research questions or discussion prompts are called challenges; 33 challenges have been posted to date. Challenges have covered a wide range of topics, from improving the contracting officer’s representative program to using mobile computing in the execution of Coast Guard missions. The annual search for ideas for Research, Development, Test and Evaluation projects was moved to this platform this year.

Input on the site can have a major impact on Coast Guard operations. “Other than the hurricane lessons learned effort, maybe our most important campaign so far was one where we sought feedback from all 47-foot motor lifeboat surfmen, officers in charge, instructors and engineers for improving the vessel just as it was entering its service life extension planning process,” Howell said. “The ideas we gathered will make the boat more effective and safer for the crew. Most importantly, end users had direct input on a major acquisition.”

The platform is also open for private challenges, limited to a particular unit, community or sector, for example. “If you’ve got a research question that could benefit from the wisdom of the Coast Guard workforce, just contact Innovation@uscg.mil,” Howell said.