The Coast Guard, which has more than 40,000 active duty members, 7,000 reservists and 8,500 civilians, is the only branch of the U.S. armed forces that has broad law enforcement authorities, Zukunft explained to a roundtable of the Defense Writers Group, a nonprofit association of defense reporters. 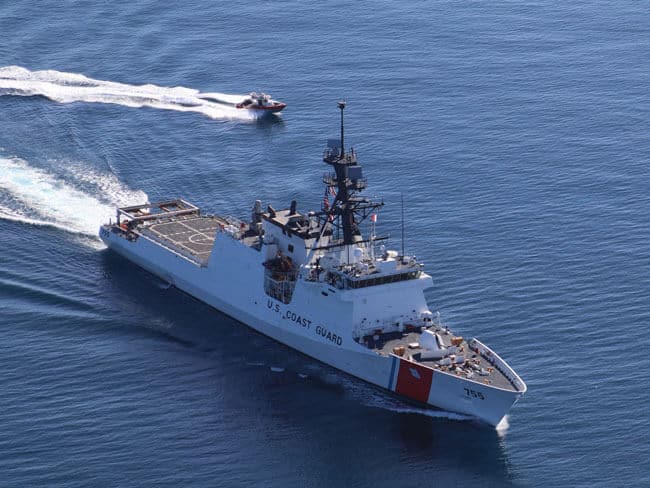 With a portfolio of more than 60 bilateral agreements, the Coast Guard, which falls under the Department of Homeland Security, has a jurisdiction that extends throughout the world, he said.

“We are truly a global Coast Guard as we look at transnational threats,” he said. “If you are in one of these (criminal) organizations, the last thing you want to see is a ship that says ‘U.S. Coast Guard’ on the side of its hull.”

The Coast Guard had assets off the coast of each of the seven continents earlier this year, the admiral pointed out. On any given day, 20 Coast Guard ships are supporting the U.S. combatant commands, he said.

In addition, the Coast Guard operates throughout the United States to safeguard waterways, protect infrastructure and provide maritime security, he said.

The Coast Guard, in partnership with interagency and international allies, interdicted a record amount of cocaine in the last year — 201 metric tons, Zukunft said.

The cocaine from Colombia was destined for the No. 1 consumer of the drug — the United States, he said. Stopping the flow not only protects Americans, he added, but also helps to prevent destabilization in Central America, since traffickers route the drug through that region.

“We have awareness of about over 80 percent of the maritime flow of drugs in the eastern Pacific, where most of it takes place,” Zukunft said, pointing out that trafficking also occurs in the Caribbean Sea.

But, even with its vigilance, the Coast Guard has finite resources to intercept suspect vessels, the admiral told the defense writers. In addition to drug trafficking, he said, security concerns include human trafficking, migrants at sea, illegal fishing and the emergence of nonstate actors.

Likening it to spreading peanut butter on bread, Zukunft said the Coast Guard could previously deploy its assets and resources evenly across the board. Now, he said, the Coast Guard has to carefully assign where its resources go.

“But at the end of the day, we still have to stack peanut butter where we see the most persistent threat that is a threat to our national security,” he added.

The Coast Guard is looking to build out of its fleet of 58 fast-response cutters, and to add a ninth national security cutter. Additionally, the service is looking to build out of a fleet of three heavy and three medium icebreakers for operations in the polar regions, where the Coast Guard projects U.S. sovereignty and assures access, the admiral said.

“The good news is we are modernizing the fleet, but it’s that annual operating and maintenance account that you have to get very creative,” Zukunft said. “Where we’re seeing the most pain is we defer a lot of our shore maintenance; that backlog continues to grow.”

Zukunft said his greatest concern right now is to have budget certainty and not temporary funding measures; the current continuing resolution that funds the government runs through April 28.

“Maybe we’ll see a short extension of that, but if we don’t have an appropriation in 2017, I will have to shut down operations,” he said, adding that will affect readiness. “This is not the time to sideline any military service, including the Coast Guard, but that’s what a (continuing resolution) would do.”