The US Navy has initiated a range of tests on its latest and the most advanced aircraft carrier, detonating explosions to ensure if the ship is war-ready. The first of these tests, named Full Ship Shock Trials, was carried out on Friday as the Navy set a mega explosive close to the USS Gerald R. Ford.

Photographs and video footage showed a gigantic burst of water shooting up from the ocean. This resulted from what carrier officials referred to as a 40,000-pound explosive. A video broadcast of how the explosion looked from the carrier’s bridge wing has also been uploaded on Twitter.

The US Geological Survey told that the explosion that occurred in the Atlantic Ocean off the Florida coast, registering as an earthquake of 3.9 magnitudes. 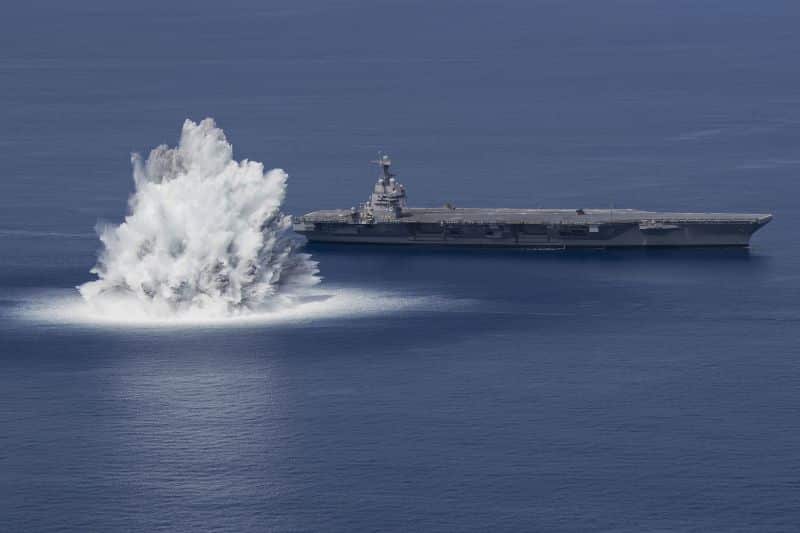 The US Navy keeps conducting shock trials of new ship designs with live explosives to reconfirm that warships can continue satisfying mission requirements even under harsh conditions they may come across in a battle.

Following the trials, the warship is expected to undergo necessary maintenance and repair activities.

The Navy said that tests are being carried out in a narrow schedule that is in compliance with environmental mitigation demands, considering known migration habits of marine creatures.

The USS Gerald R. Ford was inaugurated during the presidency
of George W. Bush with the introduction of new technologies, including an advanced electromagnetic launch system to replace the conventional steam-based catapult.