GhostSwimmer is the latest in a series of science-fiction-turned-reality projects developed by the chief of naval operations’ Rapid Innovation Cell (CRIC) project, Silent NEMO.

Silent NEMO is an experiment that explores the possible uses for biomimetic, unmanned underwater vehicles in the fleet.

Over the past several weeks, Boston Engineering’s tuna-sized device has been gathering data at JEBLC-FS on tides, varied currents, wakes, and weather conditions for the development of future tasks. 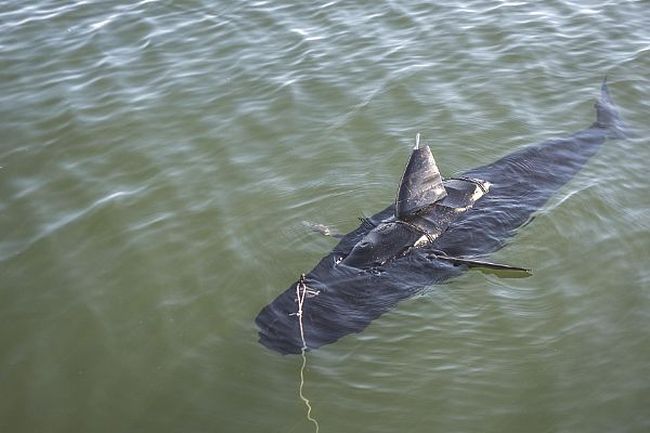 “GhostSwimmer will allow the Navy to have success during more types of missions while keeping divers and Sailors safe,” said Michael Rufo, director of Boston Engineering’s Advanced Systems Group.

The GhostSwimmer was developed to resemble the shape and mimic the swimming style of a large fish. At a length of approximately 5 feet and a weight of nearly 100 pounds, the GhostSwimmer vehicle can operate in water depths ranging from 10 inches to 300 feet.

“It swims just like a fish does by oscillating its tail fin back and forth,” said Rufo. “The unit is a combination of unmanned systems engineering and unique propulsion and control capabilities.”

The robot is capable of operating autonomously for extended periods of time due to its long-lasting battery, but it can also be controlled via laptop with a 500-foot tether. The tether is long enough to transmit information while inspecting a ship’s hull, for example, but if operating independently (without a tether) the robot will have to periodically be brought to the surface to download its data.

“This project and others that we are working on at the CRIC are important because we are harnessing the brainpower and talents of junior Sailors,” said Capt. Jim Loper, department head for Concepts and Innovation, NWDC. “The opportunity for a young Sailor who has a good idea to get that idea heard, and to get it turned into action, is greater [now] than any other time in our Navy’s history.”

The CRIC was established in 2012 to provide junior leaders with an opportunity to identify and rapidly field emerging technologies that address the Navy’s most pressing challenges and aims to find ways to quickly employ them in the fleet.

“Our mantra is ‘you have permission to be creative.’ We want our people to go out there and dream big dreams and put them into action,” said Loper. “We want to see projects like this replicated throughout the fleet. The fusion of the deckplate brainpower with support of the most senior leadership in the Navy is going to keep us moving forward throughout the 21st century.”

World-First Projects Constructed At Drydocks World Win Award For ‘Innovative Solutions
Want to share your tips and advice? Got questions? Visit the community forum to ask questions, get answers, meet people, and share your tips!