You are here: Home › Shipping News › US Navy Successful Tests First Ever Electromagnetic Catapult On Board Aircraft Carrier
TwitterFacebookLinkedInPinterestBuffer

EMALS is a carrier-based launch system designed to expand the operational capability of the Navy’s future carriers to include all current and future planned carrier aircraft. The recent test shots, known as “no-loads” because no aircraft or other loads were attached to the launching shuttle, successfully demonstrated the integrated catapult system. Using electromagnetic technology, the system delivers substantial improvements in system maintenance, increased reliability and efficiency, higher-launch energy capacity, and more accurate end-speed control, with a smooth acceleration at both high and low speeds. By allowing linear acceleration over time, electromagnetic catapults also place less stress on the aircraft.

“This is a very exciting time for the Navy,” said Program Executive Officer for Aircraft Carriers Rear Adm. Tom Moore. “For the first time in over 60 years, we’ve just conducted 22 no load test shots using electricity instead of steam technology.” 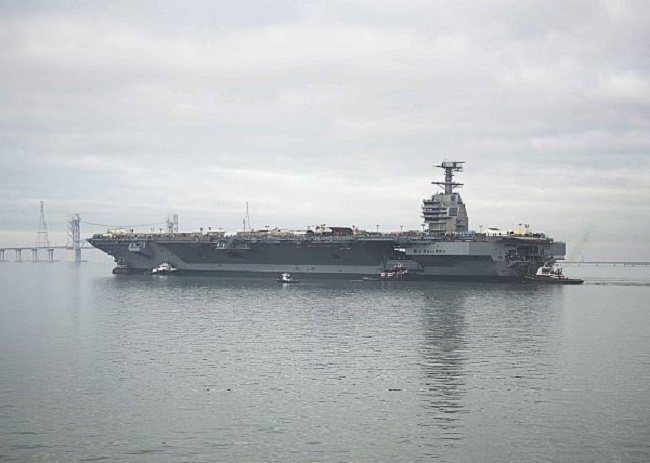 During the tests, generators within the ship produced an electric pulse, which was passed through power conditioning electronics to linear motors just below the flight deck surface. This energy allowed for the linear motors to propel the launching shuttle down the catapult track in excess of 180 knots before bringing the shuttle to a stop at the end of the track.

The next phase of EMALS testing, scheduled for this summer, will involve launching “dead-loads” off of the bow of CVN 78 into the James River. “Dead-loads” are large, wheeled, steel vessels weighing up to 80,000 pounds to simulate the weight of actual aircraft. The dead-loads will be launched from each catapult using a specific test sequence to verify that the catapult and its components are operating satisfactorily.

To date PCU Gerald R. Ford is 90 percent complete and 1550 Sailors have reported for introduction and training. CVN 78 will be commissioned in March 2016.

ONE Breaks Record For Highest Utilized Vessel
Want to share your tips and advice? Got questions? Visit the community forum to ask questions, get answers, meet people, and share your tips!