You are here: Home › Shipping News › US Navy: Criminal Charges On COs, Crewmembers Of Mccain, Fitzgerald For Collisions
TwitterFacebookLinkedInPinterestBuffer

This post has been corrected to reflect early accountability actions taken on USS John S. McCain (DDG-56) after the collision on Aug. 21 with a merchant tanker. The commander and executive officer were removed from their positions, not the Command Master Chief. The post has also been amended to clarify the definition of negligent homicide under military law. Criminal charges against crew members involved in the two fatal 2017 surface navy collisions that cost the lives of 17 sailors are likely the last accountability actions to be taken by the service, as the admiral overseeing the process has completed his review, Navy officials told USNI News on Wednesday. 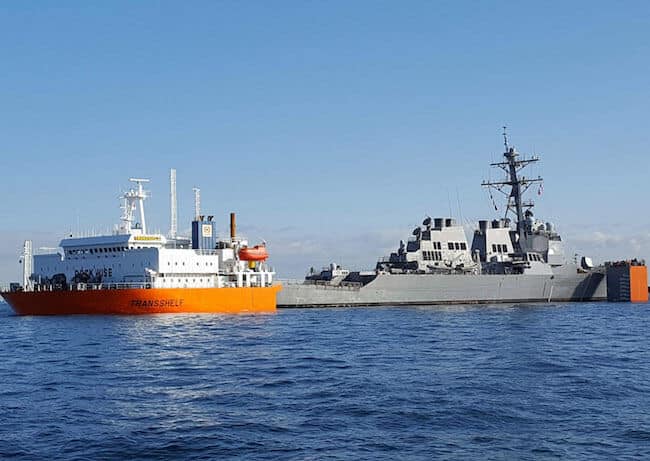 Now the commander of USS John S. McCain (DDG-56) and the commander and three junior officers on USS Fitzgerald (DDG-62) will face a combination of dereliction of duty, hazarding a vessel and negligent homicide charges in a series of preliminary court-martial hearings in the Washington, D.C. area.

A chief petty officer also faces a dereliction of duty charge that has already been preferred related to the McCain incident.

The Navy had already taken administrative actions up and down the chain of command – including firing the leadership triad of Fitzgerald, the commander and executive officer of McCain, the destroyer squadron commander that oversaw both ships, the task group commander in charge, the U.S. 7th Fleet commander, and, as of this week, the commander of U.S. Naval Surface Forces.

The criminal charges against both commanding officers and the Fitzgerald crewmembers take the accountability measures to a new level, as the Consolidated Disposition Authority in the case, Adm. James F. Caldwell, wraps up his work.

Asked by USNI News how the CDA determined where to draw the line between administrative and criminal actions, spokesman Lt. Cmdr. Dan Day said, “the CDA has been diligent and comprehensive in completing a thorough review of all relevant information, including accountability actions to date. … The CDA reviewed the actions and responsibilities of the chain of command. There were no individuals who had a direct causal link leading to the collisions; however, consistent with the findings of the Comprehensive Review there were responsibilities within the chain of command that were not met, allowing an erosion of standards and accumulation of operational risk. The CDA independently determined that previously enacted accountability actions were appropriate and sufficient,” Day said, referring to the slew of firings and other potential administrative actions.

Day said Caldwell’s review is now complete and that no new accountability actions would be taken unless additional information came to light.

The Article 32 hearings are being scheduled for the Washington-Capital area, though the timing has not yet been announced.

While the specific charges have not been issued publicly, the most serious charges – negligent homicide – is faced by McCain commander Cmdr. Alfredo J. Sanchez and some, if not all, of the officers on the team that stood watch during Fitzgerald’s collision.

According to accounts of the Aug. 21 collision between McCain and a merchant oil tanker off the coast of Singapore, Sanchez was on the bridge directing an inexperienced watch team that included sailors unfamiliar with the helm system on the destroyer. That unfamiliarity with the system was partly to blame for the loss of control of the warship for three minutes in one of the busiest merchant maritime channels in the world — a loss of control that led to the collision.

In the June Fitzgerald collision, the bridge crew and the Officer of the Deck repeatedly violated the standing orders of commander Cmdr. Bryce Benson while operating off the coast of Japan and left him asleep in his stateroom until the collision.

Under military law, “there has to be a causal link between an ‘act or failure to act of the accused’ which ‘amounted to simple negligence’ which ‘caused the death’ of the other person,” former Marine and military lawyer Robert “Butch” Bracknell told USNI News this week.

However, the argument that both commanders poorly trained their crews may not be enough to convince a members panel.

“If the act on which the government is relying is failing to properly train and supervise the sailors on watch whose errors led to the two collisions, that’s a long causation stretch to the deaths of the sailors at sea,” Bracknell said.
“It’s hard to imagine a similar causal link, for criminal legal purposes, between the CO’s failure to train the crew and the tragic deaths of the sailors on the Fitz and the McCain.”

Former Navy lawyer Brian Bouffard, who has previously defended two negligent homicide cases, said the government would not have to prove that the watch team and commanding officer acted with intent to harm or kill the sailors who died in the collision.

“The problem with negligent homicide is that most [other] criminal statutes – state, federal, military, whatever – require that a person act with some criminal intent. They commit a crime and intend for the result to occur or they know that the result is going to occur or maybe they act with criminal negligence or criminal recklessness. The idea is that we punish people who act but also acted from a bad state of mind,” he told USNI News.
“[Negligent homicide prosecution] is typically government overreaching – criminalizing simple negligence.”

Meanwhile, Caldwell’s CDA recommendations and the ongoing effort to make the surface forces safer will be at the heart of a Thursday hearing before a joint session of the House Armed Services seapower and projection forces and readiness subcommittees.

“[On Caldwell’s recommendations], I think it’s extraordinarily important to make sure the Navy sends a signal not just to folks outside the Navy but also within the Navy as to the level of operation and responsibility and accountability they expect within the Navy, and then if that doesn’t occur the severity of actions that will result because of that. I think that sends an extraordinarily strong message both inside and outside the Navy as to the importance of this issue,” seapower chairman Rep. Rob Wittman (R-Va.) told USNI News on Wednesday.