“This sophisticated new Arleigh Burke-class destroyer is part of the U.S. Navy’s Flight IIA for the DDG 51 and it is powered by on our LM2500 — the world’s most reliable marine gas turbine – in a combined gas turbine and gas turbine or COGAG configuration,” said GE’s Brien Bolsinger, Vice President, General Manager, Marine Operations, Evendale, Ohio. “The U.S. Navy is our largest marine gas turbine customer, having taken delivery of over 700 LM2500 engines operating aboard surface combatants such as frigates and destroyers,” he added. 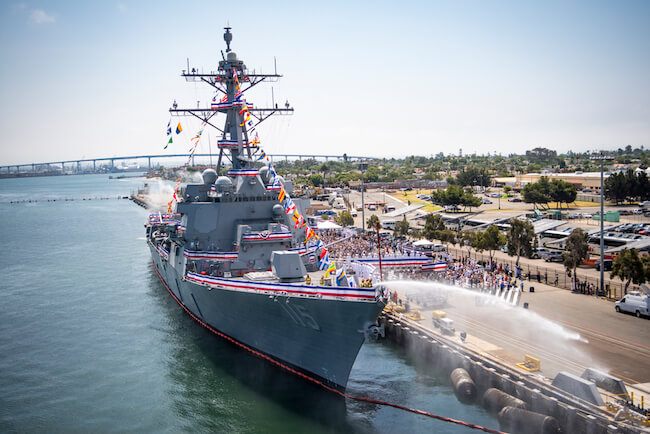 The U.S. Navy’s newest destroyer was named after U.S. Marine Corps Sergeant Rafael Peralta who died in action November 15, 2004 in Fallujah, Iraq, at the age of 25. In addition to the Navy Cross, Sergeant Peralta was awarded the Purple Heart and the Combat Action Ribbon. His other awards and decorations include a Marine Corps Good Conduct Medal, National Defense Service Medal, Iraq Campaign Medal with one bronze campaign star, Global War on Terrorism Service Medal, and the Sea Service Deployment Ribbon. He is buried at Fort Rosecrans National Cemetery in San Diego.

In his remarks during the commissioning, the Commandant of the U. S. Marine Corps, General Robert B. Neller, thanked the family of Rafael Peralta, in particular his mother, Rosa Maria Peralta. “Thank you for raising a man of character and virtue. We need more people like him in our world. Sergeant Peralta’s legacy will forever be part of this ship. All he ever wanted to be was an American, to serve his country.”

USS Rafael Peralta is the first in this flight to be built by General Dynamics/Bath Iron Works, Bath, Maine. Bath Iron Works is currently in production on future destroyers Thomas Hudner (DDG 116), Daniel Inouye (DDG 118) and Carl M. Levin (DDG 120). All of these new destroyers, as well as the DDG 122 and 124 to be constructed by Bath Iron Works, will feature GE LM2500 gas turbines.