The Navy accepted delivery of the future USS Gabrielle Giffords (LCS 10) during a ceremony, Dec. 23. 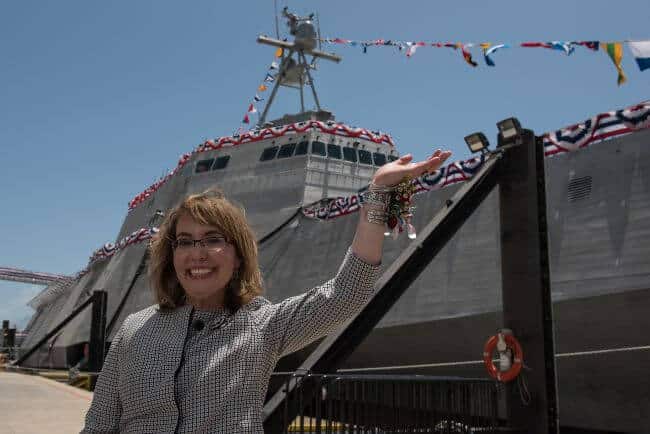 “We are pleased to receive the future USS Gabrielle Giffords into the LCS class,” said Capt. Harrison, commander, LCS Squadron (COMLCSRON) 1. “Gabrielle Giffords will join her sister littoral combat ships in their homeport of San Diego in 2017, commencing testing and training for deployed operations upon arrival.”

COMLCSRON-1 supports the operational commanders with warships ready for tasking by manning, training, equipping and maintaining all littoral combat ships in the fleet.

Delivery marks the official transfer of LCS 10 from the shipbuilder, an Austal USA-led team, to the Navy. It is the final milestone prior to commissioning, which is planned for 2017 in Galveston, Texas.

“Today marks a significant milestone in the life of the future USS Gabrielle Giffords, as transfer to the Navy occurs and her in-service counter begins,” said LCS Program Manager Capt. Tom Anderson. “I look forward to celebrating the commissioning of this fine ship, along with the ship’s namesake, this coming spring as she makes her way to her homeport of San Diego.”

Each LCS will be outfitted with a mission package made up of mission modules containing warfighting systems and support equipment. A dedicated ship crew will combine with aviation assets to deploy manned and unmanned vehicles and sensors in support of mine countermeasures, anti-submarine warfare or surface warfare missions.