You are here: Home › Shipping News › US Coast Guard Seizes 26.5 Tons Of Cocaine Worth $715 Million
TwitterFacebookLinkedInPinterestBuffer

The US Coast Guard and Royal Canadian Navy, in joint operations, have seized over 26 tons of cocaine from smugglers off the Eastern Pacific Ocean, officials said.

The cocaine, which reportedly worth an estimated $715 million, was nabbedin 27 separate missions and five bale recovery operations off of Central and South America. 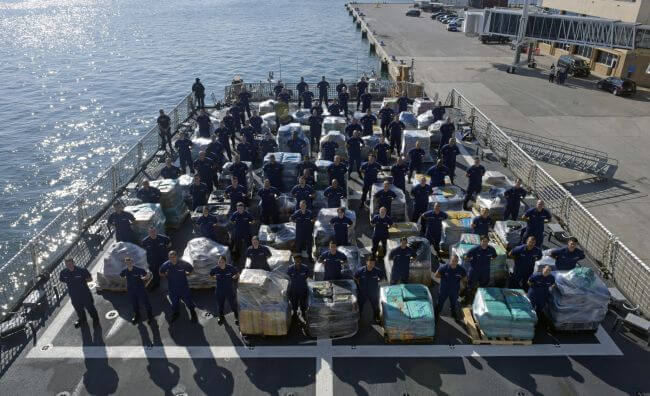 Officials also said around hundred suspected smugglers were detained at sea and later handed over to federal authorities.

Following the inter-agency operation, 26.5 tons of cocaine, which was brought ashore aboard USCG Cutter Hamilton, were unloaded in South Florida last week.

US Coast Guard Atlantic Areacommander, Vice Adm. Karl Schultz, said the latest operations not only showcases the threat posed by dangerous cartels, gangs and criminal groups, but also shows the commitment of the Coast Guard to detect and prosecute operatives for such criminal networks.

Schultz also added that the drugs that seized by the force came from several areas of South America, including the Andean Ridge, Bolivia, Peru and Colombia.

The Coast Guard teams have been conducting raids aboard several ships and taking drugs into custody since October this year and the presence of the US and allied forces in the drug transit areas off Eastern Pacific and Caribbean Basin is part of its Western Hemisphere Strategy.

Earlier in September, the Coast Guard seized more than 5,600 pounds of cocaine after its Cutter Waesche intercepted a self-propelled semisubmersible, known asnarco submarine.

The custom-built, drug-running submarine was spotted in the Pacific Ocean off the Central American coast and the US personnel apprehended five suspect.

The US Coast Guard earlier said theseizure amount of cocaine in fiscal year 2016 was a record as it has topped the 367,700 pounds of drug intercepted during fiscal year 2008.