Temporary Denial of Service 911 hoax calls plague our nation’s(U.S.A.) first responder agencies. Hospitals, police and fire departments, and other public service entities are continually vulnerable to bomb threats, active shooter situations, and general false emergency claims. Similarly, there is a growing hoax call problem on the Channel 16 maritime distress frequency, which mariners rely on for radio communications in our nation’s ports and waterways.

Search and rescue (SAR) hoax calls disrupt and divert the Coast Guard’s operational response to legitimate mariners in emergency situations. Regrettably, these perpetrators often go unpunished due to a lack of offshore geo-location capability on the part of Coast Guard and local law enforcement investigators. 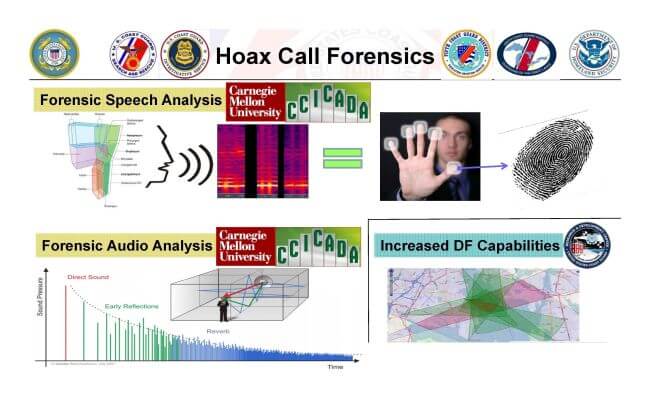 As part of a project to better identify, geo-locate and prosecute SAR hoax callers, representatives from the Coast Guard Research and Development Center and the Coast Guard Investigative Service (CGIS) have partnered with an academic research team from Carnegie Mellon University. This CMU team specializes in voice forensics and audio analytics, which serves as a critical component of the R&D Center’s three-prong approach to tackle the SAR hoax call phenomenon.

Supported by the greater Department of Homeland Security Office of University Programs collaboration, this Coast Guard-CMU partnership not only advances academic research efforts in the field of voice analytics, but also enables Coast Guard technology agents to address our most pressing national security and law enforcement challenges.

To further deter serial and future SAR hoax callers, the Coast Guard R&D Center has partnered with several leading media outlets to not only communicate the SAR hoax problem, but to also broadcast the potential fines and punishments levied against those serial callers. In addition to future publication by national media outlets, the R&D Center’s SAR hoax team recently fielded interviews with media representatives from Rutgers University’s Command, Control, and Interoperability Center for Advanced Data Analysis, or CCICADA.

To best publicize the Coast Guard’s approach to identifying and prosecuting these nefarious actors, the Coast Guard maintains a close relationship with CCICADA and other DHS Centers of Excellence in greater homeland security research areas and problem sets. With this media effort, the Coast Guard seeks to demonstrate advances in law enforcement tactics to geo-locate these criminals and prosecute these cases to the furthest extent in a court of law.