You are here: Home › Shipping News › US Coast Guard Offloads More Than $50 Million Worth Of Cocaine
TwitterFacebookLinkedInPinterestBuffer

The offload is a result of a drug interdiction in the Caribbean by Coast Guard Cutter Tahoma crewmembers in August.

The tanker, contraband and suspected smugglers were turned over to federal law enforcement officials in St. Petersburg. 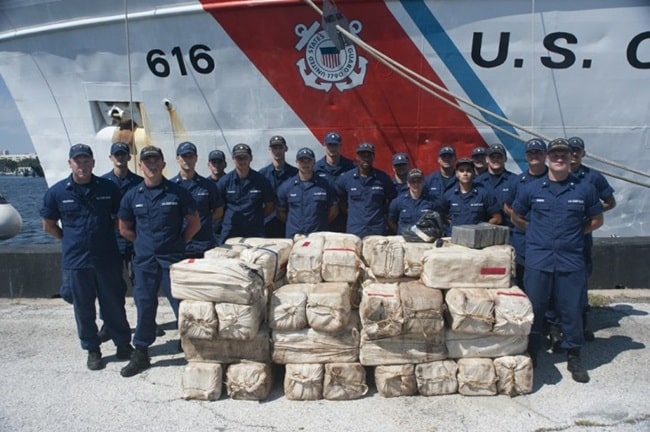 “This offload sends a direct message to those that seek to exploit a disaster to smuggle contraband at sea, that our operations continue to support border and national security,” said Rear Adm. Peter Brown, commander of the Coast Guard’s 7th District. “While we continue to support hurricane response efforts, our interagency partners at the Department of Homeland Security and Department of Justice remain focused and committed to dismantling these criminal organizations.”

The Coast Guard increased U.S. and allied presence in the Eastern Pacific Ocean and Caribbean Basin, which are known drug transit zones off of Central and South America, as part of the Western Hemisphere Strategy. During at-sea interdictions in international waters, a suspected vessel is initially located and tracked by allied military or law enforcement personnel. The interdictions, including the actual boardings, are led and conducted by U.S. Coast Guardsmen. The law enforcement phase of counter smuggling operations in the Caribbean Sea are conducted under the authority of the 7th Coast Guard District headquartered in Miami, Fla.

The cutter Tahoma is a 270-foot Medium Endurance cutter homeported in Kittery, Maine.

Daikin Reefer Celebrates 50 Years Of Market-Leading Reefer Innovation
Want to share your tips and advice? Got questions? Visit the community forum to ask questions, get answers, meet people, and share your tips!