26th September: A rescue operation of a tug supply vessel Bourbon Rhode under Luxembourg flog is underway, as the vessel was in transit at 1 200 nautical miles off Martinique island and 60 nautical miles South-South East from the eye of category 4 hurricane “Lorenzo”. In particularly adverse weather conditions, the 14 crew members are facing a water ingress in the rear part of the vessel.

A crisis cell has immediately been activated and it ensures the coordination, out of Marseilles, of the rescue of the vessel and its crew, in close collaboration with authorities, including the Regional Operational Center of Surveillance and Rescue (CROSS) West Indies-Guyana. In order to bring the quickest support possible, the CROSS has asked that bulk carrier “SSI EXCELLENT” (229 m long) change its route and assist the Bourbon Rhode. Situated of 200 nautical miles South, the bulk carrier is expected to arrive on zone tomorrow morning (local time).

27th September: Coordinated by the Regional Operational Center of Surveillance and Rescue (Cross) of West Indies-Guyana, the search for the tug supply Bourbon Rhode is still underway as a general cargo ship has arrived on zone. Weather conditions remain particularly adverse and the search zone is affected by the outer edge of Hurricane Lorenzo. Other maritime means are being mobilized in order to provide assistance to the crew, as well as air support from NHC (National Hurricane Center). 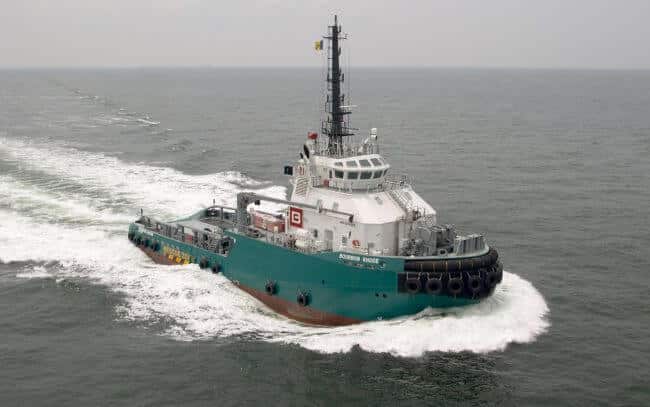 The crisis cell is working in very close cooperation with the Cross. BOURBON’s teams are mobilized to keep the families of the crew members informed and bring them full support in this difficult time.

28th September: In the context of search operations of tug supply vessel Bourbon Rhode started on September 26, the mobilized rescue teams have recovered a lifeboat with 3 crew members on board, the lifeboat having been identified by a Falcon 50 especially equipped for this type of mission and sent by the French Navy. The 3 crew members are currently taken in charge by the medical support team onboard the commercial vessel, which provided assistance, and are currently placed under medical observation.

It has been confirmed that the vessel has sunk. The search continues to be carried out in weather conditions that are improving. All necessary means are implemented by the Cross AG and the French Navy, under the authority of the Prefect representing the State’s maritime authority, namely numerous flyovers carried out by the Falcon 50 over the search zone. Numerous commercial vessels have had their course changed in order to bring assistance, as well as a plane of the U.S. National Hurricane Center.

The crisis cell put into place by BOURBON works in very close collaboration with the Cross AG and the French Navy. BOURBON’s teams are mobilized to keep the families of the crew members informed and bring them full support in this difficult time.

29th September: The search for tug supply vessel Bourbon Rhode continues with the full support of Cross AG (Regional Operational Center of Surveillance and Rescue) and the French navy, under the authority of the Prefect representing the French national maritime authority. Five commercial vessels have changed course in order to bring assistance to the rescue teams. A Falcon 50 of the French navy, as well as the aircraft of the American National Hurricane Center (NHC), conducted numerous overflights of the search area. The French navy’s surveillance frigate “Ventose” and “Panther” helicopter will intervene tomorrow, September 30.

Yesterday, at the beginning of the night, a capsized fast rescue craft was spotted first by the NHC aircraft and then by the Falcon 50. A commercial vessel engaged in the operation is currently headed in its direction in order to try to recover it.

BOURBON’s crisis cell and teams remain fully mobilized to keep track of the situation and maintain contact with the families of the crew members, bringing them their full support in this difficult time.

30th September: BOURBON is sad to report the death of one of the crew members of the Bourbon Rhode. The body of the missing seafarer was located by one of the aircraft involved in the search and has been recovered by one of the five vessels that came to assist. The seafarer’s family was immediately notified and they requested that the identity not be disclosed.

Rescue operations are continuing to find the other crew members, with significant maritime and air search resources deployed by the French and American authorities.

“All our thoughts and prayers go to his family and loved ones. This tragedy affects all BOURBON employees who express their full support to the seafarers’ families. We remain fully mobilized on search operations to find the other missing seafarers and I would like to express our gratitude to the rescuers, all the teams of the CROSS (Regional Operational Centre for Surveillance and Rescue) and the teams of the crisis cells who are working tirelessly to this end” declared Gaël Bodénès, Chief Executive Officer of BOURBON Corporation.