Following collision of container ships in Karachi Port on Monday, Karachi Port Trust (KPT) had ordered an investigation and suspended port operations until fallen containers were cleared from the water.

However, according to an anonymous source (a high ranking KPT official), London Underwriters and their lawyers are underway to claim KPT for recovery of damages to Hapag Lloyd container ship TOLTEN when she collided with a ship berthed at SABT.

According to the source, the pilot on board the ill-fated container ship is not only medically unfit but also not licensed to handle any ship, the reason being he has been deceiving KPT by using an expired COC (certificate of competency), on which basis, the license is issued (thus deceiving the authorities by using an expired license is a criminal offence). 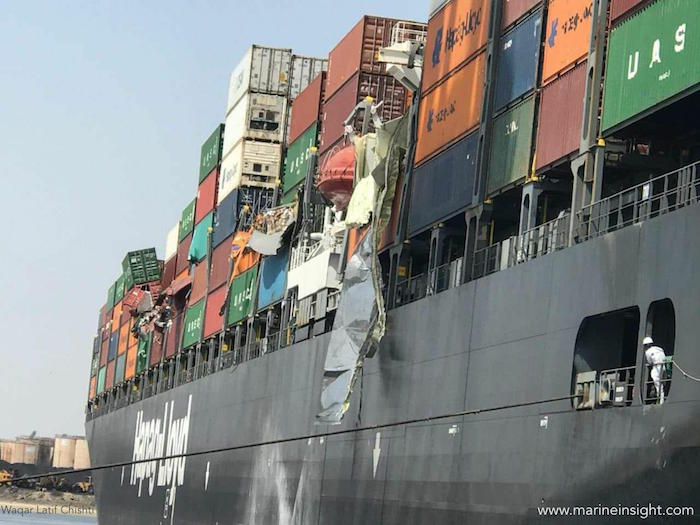 In most of the countries, pilots need a valid COC and the port authority is responsible for checking the same. The underwriters are very much surprised by this development and have contacted Capt. Anwar Shah ex. DG port and shipping Pakistan regarding the same. The pilot was taken to PNS Shifa for his medical which is mandatory after an accident but was refused, and eventually the medical was held at Jinnah Hospital at 2 AM. The results of the tests are still awaited.

Disclaimer: This news has been sourced from available information have not been authenticated by any statutory authority. The author and Marine Insight do not claim it to be accurate nor accept any responsibility for the same. The views constitute only the opinions and do not constitute any guidelines or recommendation on any course of action to be followed by the reader.

Watch: How Container Shipping Works – The Process Of Transporting Cargo In Containers