The IMO Tier III requirements reduce nitrogen-oxide emissions (NOx) by approximately 76% in comparison to a Tier II engine. This requirement only applies to new vessels and engines. It poses a significant challenge to engine designers, as they need to apply NOx-reduction measures with the help of other engine technologies.

Relevant for all vessels with keel-laying on or after 1 January 2016 with engine output of 130kW and above, when operating in North American and US Caribbean Sea Emission Control Areas.

The IMO NOx-emission limits apply to diesel engines and depend on an engine’s maximum operating speed (n, rpm), as presented in the table below. Tier I and Tier II are global requirements, whereas Tier III standards only apply to current existing Emission Control Areas (ECAs) for NOx (North American and US Caribbean Sea).

In future ECAs that regulate NOx emissions, the Tier III standards will apply to ships with keel-laying on or after the date of adoption of such an ECA.

When the global Tier II limits came into force in 2011, engine-makers were able to tune the engines to comply with these new emissions limits. Tier III poses a challenge to engine designers, as tuning is not an option anymore and they need to apply NOx-reduction measures using other engine technologies. 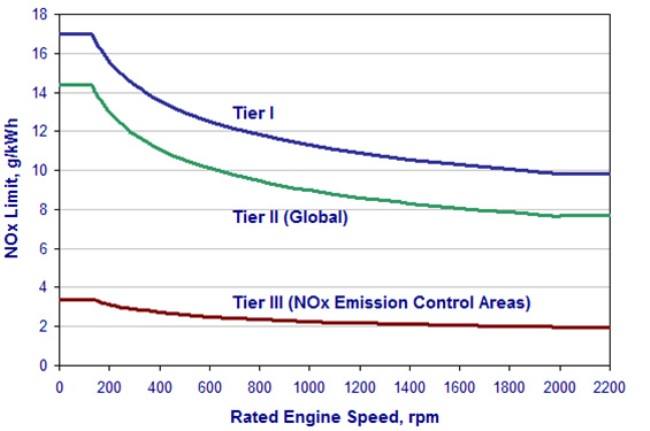 The available technologies for compliance with the IMO NOx Tier III limits currently include:

This is the most widely used method for purification of NOx from an engine’s exhaust gas.

Recirculation of the exhaust gas back to the engine’s combustion process. This is still a relatively new technology for maritime applications, but is developing into a competitive option for NOx compliance.

“Superyachts” (vessels of 24m and above, but of less than 500 GT, which are designed and solely used for recreational purposes) constructed before 1 January 2021 and all yachts smaller than 24m, irrespective of construction date, are exempt from Tier III.

A major engine conversion has to comply with the current standards. Major conversions are a non-identical replacement, additional engines installed on board or a substantial modification made to an engine. For example, if the conversion is carried out in 2016, the engine would have to comply with Tier III requirements.

In the case of engine replacements, the new engine has the option of meeting Tier II requirements if it does not achieve compliance with Tier III as stated in Reg.13 para5.1.1. However, this is subject to case by case approval.

Recommended actions
This requirement only applies to vessels with keel-laying on or after 1 January 2016. Tier III is not a retroactive requirement, hence it will not be applicable to existing engine installations. Knowing and understanding the technological solution options – such as SCR, EGR or LNG – can be one key success factor for your newbuilding plans.