You are here: Home › Shipping News › Unmanned Ships – The Good, The Bad And The Ugly
TwitterFacebookLinkedInPinterestBuffer

The world is interconnected through global trade on the basis of the transportation industry. And, it will continue to grow, with a predicted rise of nearly a third in seaborne-trade towards 2030, and with increases in tonne-mileage up to 74,000 billion over the forecast period.

In other words, the ocean will experience substantial increases in traffic, the pressure will get much higher and risk of marine accidents and incidents at sea will persist.

It is estimated that roughly 90% of marine casualties and incidents caused by human mistakes, costing over EUR1.4 billion in marine liability insurance claims. 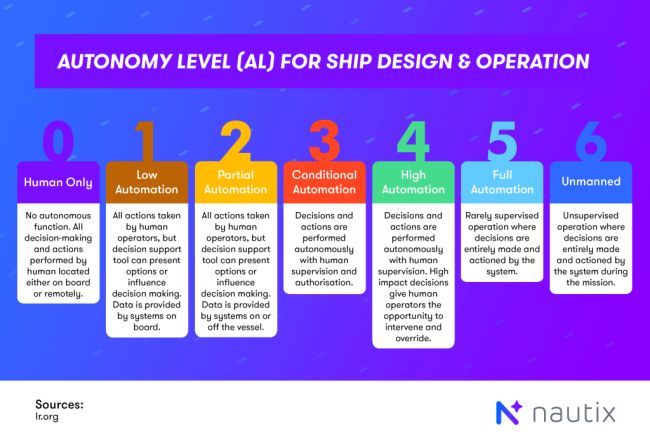 Artificial Intelligence and the Era of Autonomous Shipping

This, in fact, has urged businesses to invest in automation underpinned by transformational technologies of Artificial Intelligence (AI) and machine learning, as the ultimate solution to improve productivity, efficiency, and safety by eliminating human errors.

Statistics have shown that AI has the capability to boost the transportation and logistics industry performance by almost 90%, potentially increase the industry’s annual revenue up to EUR0.45 trillion.

“Autonomous shipping is the future of the maritime industry. As disruptive as the smartphone, the smart ship will revolutionize the landscape of ship design and operations”

By definition, the term ‘autonomous shipping’ is mainly used to describe a self-sailing crewless vessel, but there are actually various autonomy levels. According to Lloyd’s Register, autonomy levels (AL) ranges from ‘AL0’ meaning traditional manned ship to ‘AL6’ referring to a fully autonomous ship with the operating system being able to calculate all the consequences and risks, and make decisions by itself, without any human interference.

This means that, an autonomous ship does not have to be unmanned, while the remote control of an unmanned ship means, it is not, in fact autonomous.

Attractive benefits of autonomous and unmanned ships is increasingly being identified and discussed among maritime businesses. According to research, while cheaper labour cut cost by 60%, automation could cut labour costs by 90%. 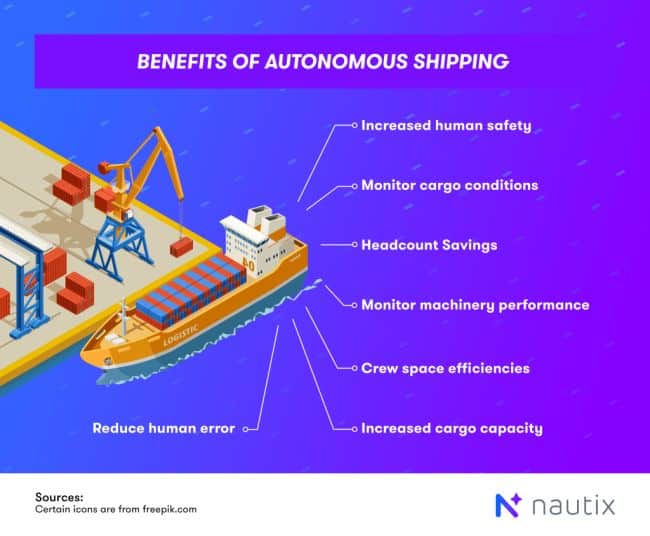 As stated by Rolls-Royce “Many facilities and systems on board are only there to ensure that the crew is kept fed, safe, and comfortable. Eliminate or reduce the need for people, and vessels could be radically simplified.”

According to studies, the removal of the accommodation structure can result in a 6% reduction of fuel and another 5% reduction in construction costs, while opens up for more cargo space and thus higher freight income.

MUNIN project predicted a saving of more than EUR6 million per ship over a 25-year period in fuel consumption and crew expenditures — the most critical expense in vessel operating cost.

It is no doubt that these kinds of ships will give possibilities for headcount savings, eliminate human tragedy, and allow for more efficient use of space in ship design. Autonomous ships would also optimise maintenance activities and maximise fuel utilisation, consequently leave a smaller carbon footprint.

The advantages of autonomous ships are plentiful, and autonomous shipping is not just a fanciful idea that could happen in the future, or at least not anymore. It is being developed now by a number of initiatives set up worldwide.

The autonomous ships market size is predicted to grow from EUR5.5 billion in 2018 to EUR12.5 billion by 2030, at a Compound Annual Growth Rate (CAGR) of 7.00% during the forecast period. 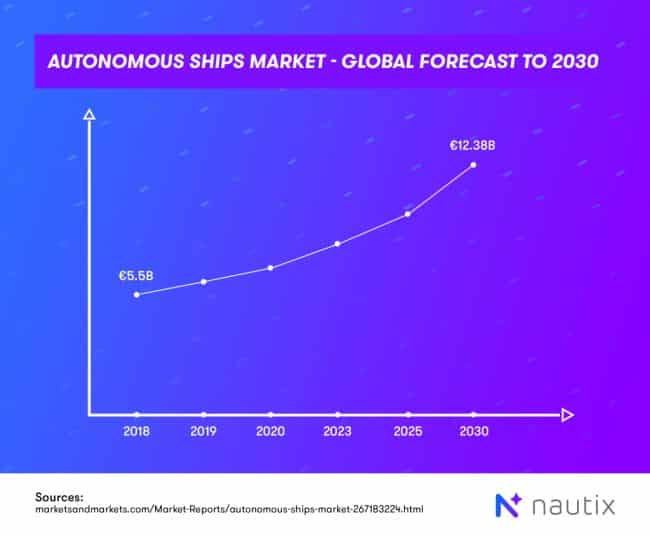 How Many Challenges This Digital Disruption Would Pose?

But despite the potential benefits especially the operational savings, first, there will be large capital expenditure in initially investing in the technology, especially in the early stages of its development.

There will also be investments in setting-up of onshore operations to monitor fleet movements, especially when there are incompatibilities between the current marine infrastructure and an unmanned vessel. 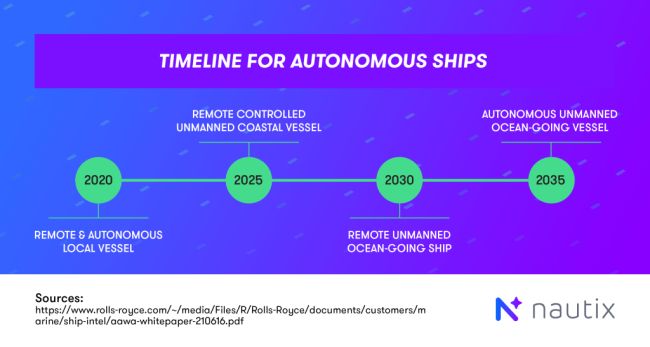 However, if the estimates are correct, there won’t be any results until 2025, when the first remote controlled, unmanned coastal vessels is launched and, by 2035 we might see fully autonomous, unmanned ocean–going ships.

In addition to construction cost, fuel cost can increase as autonomous vessels must run on higher-grade fuel such as Marine Diesel Oil (MDO) or Marine Gas Oil (MGO) to ensure smooth operation of engines. Estimations show that MDO/MGO would have to decrease about 12% in price to justify an investment in an autonomous bulker in the current market.

Secondly, there are unanswered legal questions — companies don’t yet know how international laws will apply to vessels that have no humans on them, as implementation of unmanned ship is illegal according to the minimum crew requirements regulation. Also, who is liable if an accident takes place?

Considering shipping is an international practice, such modification would have to consider a complex political, societal and economic matrix. As stated by World Maritime University, it is unlikely that there will be any agreed international guidelines and regulations regarding autonomous ships within the next decade. And what if governments and authorities can not make an agreement and all the efforts go back to zero?

Furthermore, it is believed that these remote controlled vessels will lack the skills, knowledge and experience which professional seafarers provide, according to the International Transport Worker’s Federation (ITF). What would happen if there are problems requiring immediate attention — such as cyber-attack, machinery maintenance or breakdown, or sudden changes in routes due to unforeseen events, natural or man-made? 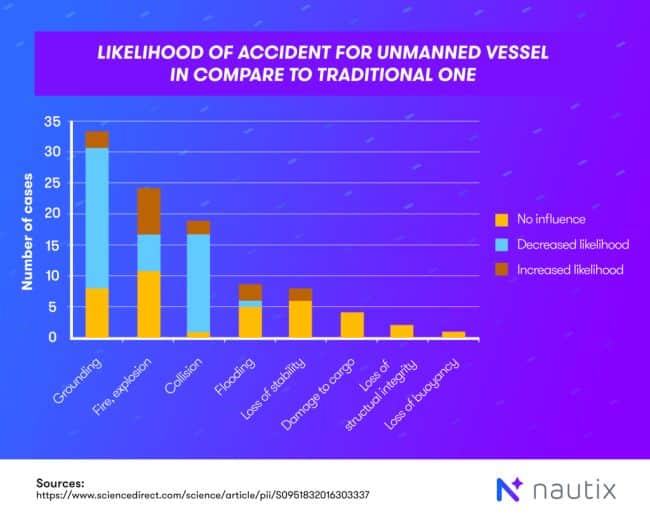 Digital Disruption Is a People Problem

Many in the industry, though, point out that most of these concerns are being addressed. However, there seems to be a bigger and most pressing challenge is to gain public acceptance, especially concerns about technologies eating up jobs.

The industry employs an estimated 1.6 million people on ships and on land, who currently are the protagonists of 90 per cent of world trade. According to a study published by the International Transport Federation (ITF) and the International Federation of Shipmasters’ Associations (IFSMA), more than 80 per cent of seafarers voiced their anxiety about possible job losses with the advent of automation and AI, as the new technology has already surpassed certain human capabilities.

In fact, this industrial revolution could replace up to 35% of UK workers and 47% of American jobs over the next 20 years, as researched by Oxford University. The technology is expected to eliminate not just low-skilled jobs but also high-skilled groups — such as traders, financial advisors, legal assistants — as the technology possesses cognitive technology that can think like a human, enabling it to analyze and interpret all of your data, including unstructured text, images, audio and video. 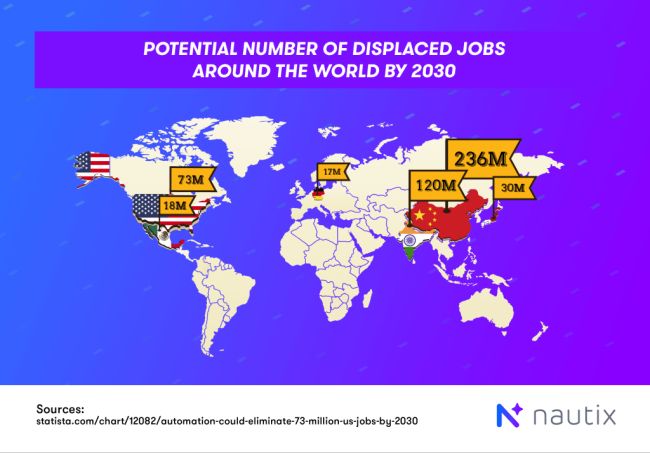 In other words, no one is safe from the increasing use of technology. Many seafarers will have troubles to get work ashore after their jobs disappearing with automation and AI. According to World Maritime University, the introduction of autonomous ships will potentially decrease the demand for seafarers, leading to a reduction of 22 per cent by 2040.

The International Chamber of Shipping also expresses their concerns on seafarer mental issues as the number of people on ships decreases, as well as their functions are taken by machines. This will result in less social interactions, leading to loneliness and potentially depression.

Automation and AI will become so ubiquitous that displaced workers will have nowhere to go with their current knowledge and competences. As a result, it will pose a serious threat on many economic and social issues. Society cannot afford to presume that this digital revolution will create jobs as quick as eliminating them.

”It’s one of the dirty secrets of economics: technological progress does grow the economy and create wealth, but there is no economic law that says everyone will benefit” 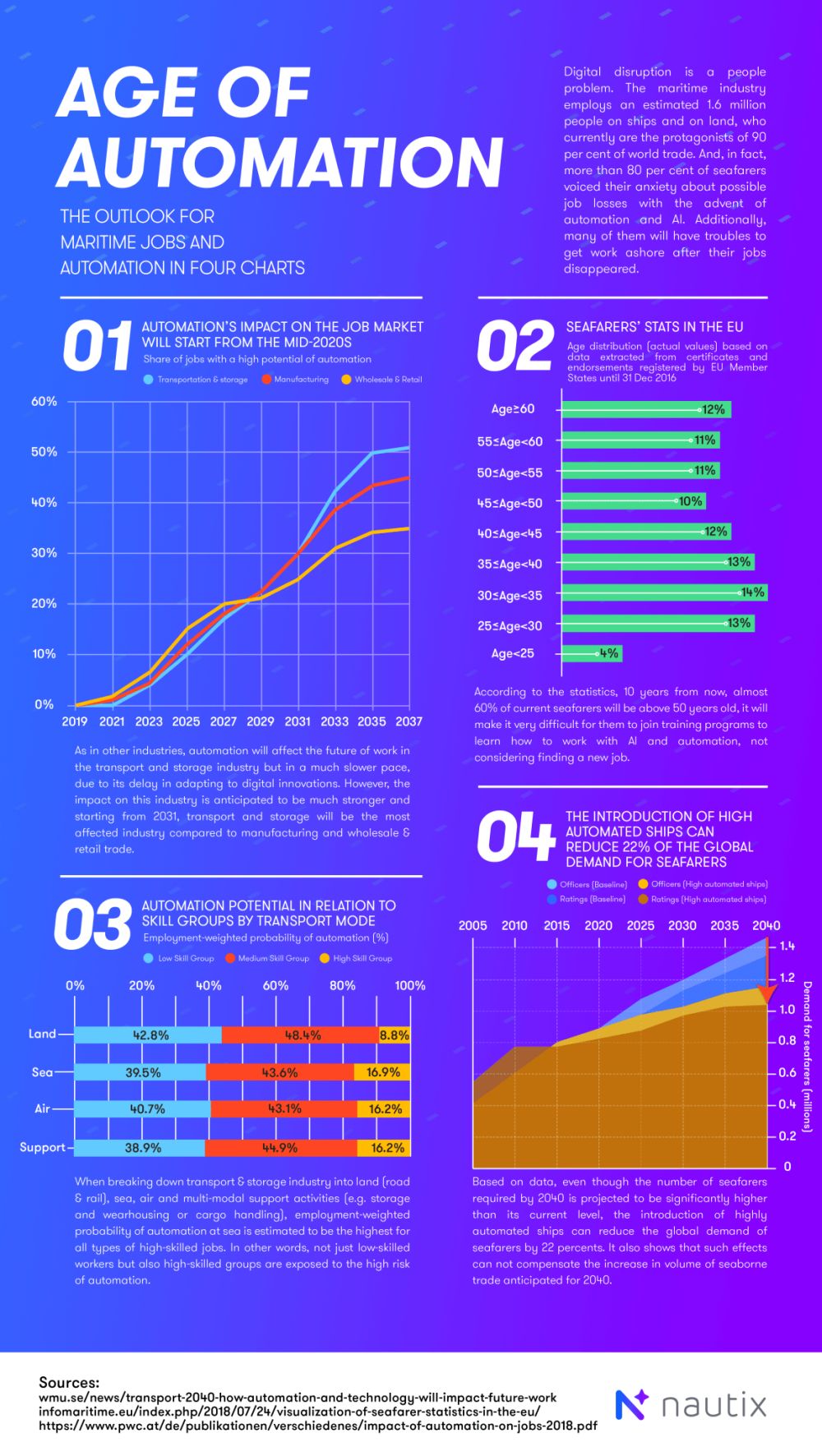 What should be happening?

Automation and AI is the future that we can not avoid, but would unmanned ships become one, we are not so certain. However, the industry still need to act now in order to prepare our current and future workforce — such as reforming education, boosting training programs that support seafarers to work with AI and automation.

So, instead of removing human factors and replacing completely with technology, shipping businesses should elevate human potential through technology by using available AI-powered tools to predict operational risks, navigation solution, voyage optimisation, and the like to reduce maritime accidents.