Today the project, Ventusky, that displays weather from around the world, introduced a unique wave visualisation system: https://www.ventusky.com/?p=40;147;2&l=wave. With the help of animated arcs, it shows the movement of waves in the oceans and seas across the world. The map clearly depicts how waves propagate across the water’s surface in relation to the wind. The visualisation also exposes hazards that arise in specific areas (places where the wind blows in a direction opposite of the direction of the waves, for instance). 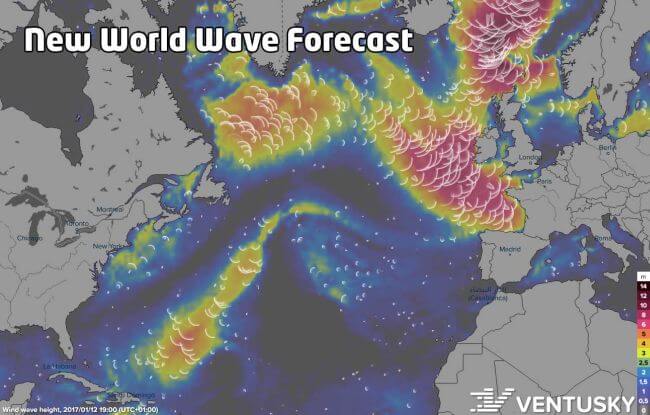 The reason is that the wind does not affect the height of the waves solely in that specific location, but also in locations hundreds of kilometres away, which may be completely windless. The visualisation itself, therefore, takes into account not only the direction of wave propagation, but also their height.

This feature allows you to quickly find areas where high wind waves are travelling in a different direction from the swells. This situation is very dangerous for boat transport (waves are much less predictable and it is very difficult for sailors to control their boats in such situations). Another highly dangerous situation arises when the wind is blowing against the direction of the waves, making them much steeper. The application can also display the period of the swells and wind waves.

The goal of the application is to offer highly precise data on waves in the oceans and seas not only to sailors, but also to surfers and swimmers, and thus increase overall safety. It is the first on-line application that displays ocean waves to such a comprehensive degree.

ICS Issues Guidance To Shipowners In The Face Of Corona Virus

Port Of Hamburg Ends First Half Of 2019 With Strong Growth

CargoSmart and Maritime Operators Commit To Transforming The Industry

Wärtsilä To Supply Engines For One Of The World’s Largest Cutter Dredger Vessels
Want to share your tips and advice? Got questions? Visit the community forum to ask questions, get answers, meet people, and share your tips!