Last week, at the International Conference on Intelligent Robots and Systems, MIT researchers unveiled an oval-shaped submersible robot, a little smaller than a football, with a flattened panel on one side that it can slide along an underwater surface to perform ultrasound scans.

Originally designed to look for cracks in nuclear reactors’ water tanks, the robot could also inspect ships for the false hulls and propeller shafts that smugglers frequently use to hide contraband. Because of its small size and unique propulsion mechanism — which leaves no visible wake — the robots could, in theory, be concealed in clumps of algae or other camouflage. Fleets of them could swarm over ships at port without alerting smugglers and giving them the chance to jettison their cargo.

“It’s very expensive for port security to use traditional robots for every small boat coming into the port,” says Sampriti Bhattacharyya, a graduate student in mechanical engineering, who designed the robot together with her advisor, Ford Professor of Engineering Harry Asada. “If this is cheap enough — if I can get this out for $600, say — why not just have 20 of them doing collaborative inspection? And if it breaks, it’s not a big deal. It’s very easy to make.” 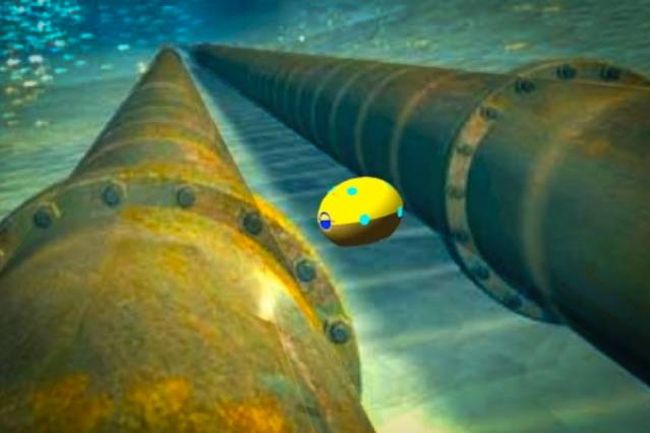 A screen shot from an animated video shows how the robot could be used to perform ultrasound scans. Credits: mit.edu

Indeed, Bhattacharyya built the main structural components of the robot using a 3-D printer in Asada’s lab. Half of the robot — the half with the flattened panel — is waterproof and houses the electronics. The other half is permeable and houses the propulsion system, which consists of six pumps that expel water through rubber tubes.

Two of those tubes vent on the side of the robot opposite the flattened panel, so they can keep it pressed against whatever surface the robot is inspecting. The other four tubes vent in pairs at opposite ends of the robot’s long axis and control its locomotion.

As Bhattacharyya explains, the elliptical shape of the robot is inherently unstable — by design. “It’s very similar to fighter jets, which are made unstable so that you can maneuver them easily,” she says. “If I turn on the two jets [at one end], it won’t go straight. It will just turn.”

That tendency to turn is an asset when the robot is trying to execute tight maneuvers, but it’s a liability when it’s traveling in a straight line scanning the hull of a ship. So all the tubes exit the robot at different angles, which Bhattacharyya calculated to provide the greatest degree of control over the robot’s instabilities.

In the robot’s watertight chamber are its control circuitry, its battery, a communications antenna, and an inertial measurement unit, which consists of three accelerometers and three gyroscopes that can gauge the robot’s motion in any direction. The control algorithm constantly adjusts the velocity of the water pumped through each of the six jets to keep the robot on course. 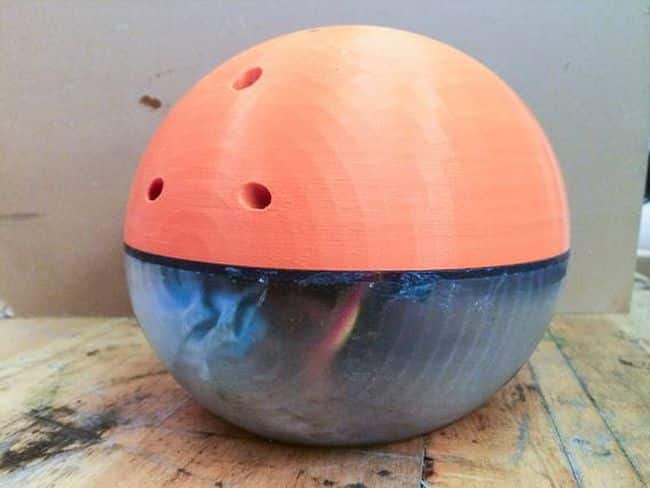 Half of the robot is waterproof and houses the electronics. The other half is permeable and houses the propulsion system, which consists of six pumps that expel water through rubber tubes. The main structural components of the robot were made with a 3-D printer. Credits: mit.edu

In their initial experiments, the researchers were just testing the robot’s ability to navigate to an underwater surface and stay in contact with it while traveling in a straight line, so the prototype is not yet equipped with an ultrasound sensor.

The rechargeable lithium batteries used in the prototype, Bhattacharyya says, last about 40 minutes. Since the robot can travel between half a meter and a meter per second while pressed against a surface, that should give it ample time to inspect multiple small craft before being recharged. The researchers envision that teams of the robots could be kept in rotation, some returning to port to recharge just as others are going back on duty.

Their next prototype, Bhattacharyya says, will feature wirelessly rechargeable batteries. And modifications to the propulsion system, she says, should increase the robot’s operation time on a single charge to 100 minutes.

Bhattacharyya notes that while she and Asada have demonstrated the robot’s ability to travel along a smooth surface, the hulls of many ships will have encrustations that might prevent continuous contact. Ultrasound, however, works only when the emitter is in direct contact with the object to be scanned — or when its distance is a specific multiple of the wavelength of sound.

Maintaining that precise distance is a tall order, but in ongoing work, Bhattacharyya and Asada are exploring mechanical systems that would create hydrodynamic buffers of just the right depth to enable the robot to perform ultrasound scans without surface contact. 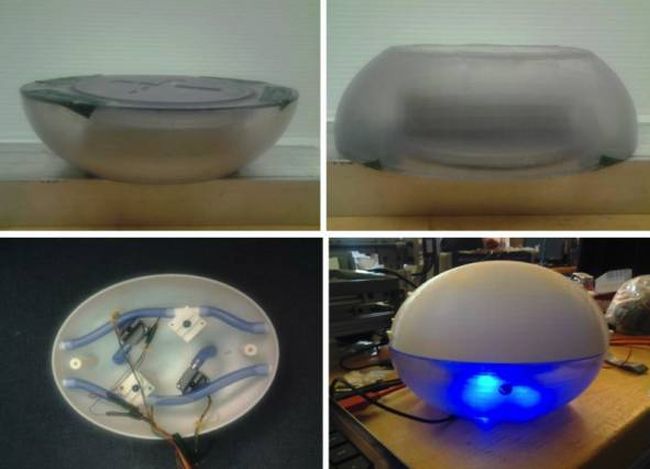 In the robot’s watertight chamber are its control circuitry, its battery, a communications antenna, and an inertial measurement unit, which consists of three accelerometers and three gyroscopes that can gauge the robot’s motion in any direction. Credits: mit.edu

Nathan Betcher, a special-tactics officer in the U.S. Air Force, has followed Bhattacharyya and Asada’s work closely. “I have a great deal of interest in seeing if this type of technology can have a substantive impact on a number of missions or roles which I might be charged with in the future,” he says. “I am particularly interested to see if this type of technology could find use in domestic maritime operations ranging from the detection of smuggled nuclear, biological, or chemical agents to drug interdiction, discovery of stress fractures in submerged structures and hulls, or even faster processing and routing of maritime traffic.”

The MIT research was funded by the National Science Foundation.

IMO: Bangladesh Ready For Next Phase To Make Ship Recycling Green And Sustainable

NYK Vessel First To Make Commercial Transit Through Expanded Panama Canal
Want to share your tips and advice? Got questions? Visit the community forum to ask questions, get answers, meet people, and share your tips!