Top 5 ship owners are Greece, Japan, China, Germany and Singapore. Together they have a market share of 49.5% of dwt. Only one country from Latin America (Brazil) is among the top 35 ship owning countries, and none from Africa.

Top 5 flag registries are Panama, Liberia, Marshall Islands, China Hong Kong SAR and Singapore. Together they have a market share of 57.8%. Developing countries flag more than 76% of the world fleet in dwt. In terms of vessel types, bulk carriers account for 42.8% of dwt, followed by oil tankers (28.7%), Container ships (13.2%), other types (11.3%) and general cargo ships (4%). 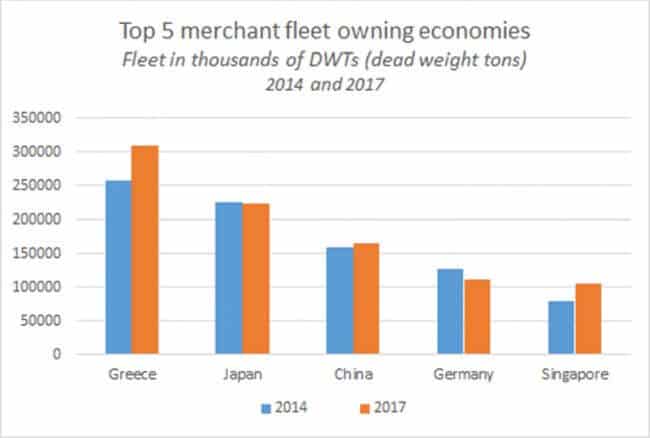 Four countries (India, Bangladesh, Pakistan and China) together accounted for 94.9% of ship scrapping in 2016 (GT).

The data confirms a continued trend of industry consolidation, where different countries specialize in different maritime sub-sectors, as analyzed in UNCTAD’s Review of Maritime Transport 2016 and a special chapter of the 2011 Review. It also confirms the growing participation of developing countries in many maritime sectors.