Solutions to address human-induced “Ocean Change” are needed to save life in the ocean and reverse the cycle of decline in which it is caught, according to Fiji’s Ambassador Peter Thomson, the UN Secretary General’s Special Envoy for the Ocean.

Peter Thomson, who was visiting the International Maritime Organization (IMO) in London, said that as a Fijian, he had personally witnessed the degradation of the marine environment in his lifetime, citing marine litter and coral bleaching as just two examples. 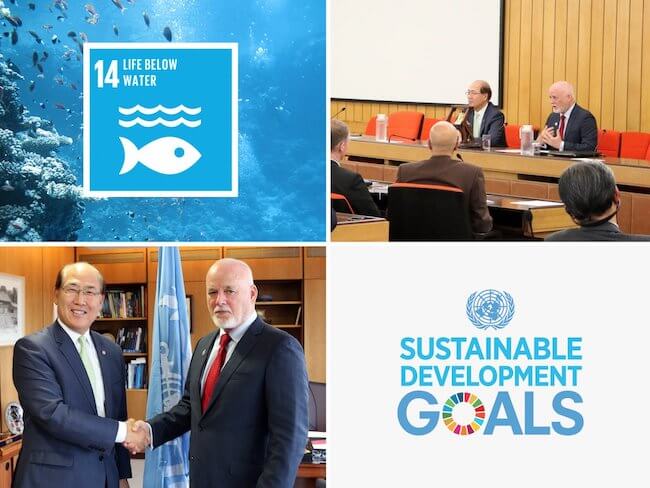 “As a grandfather I find these changes tragic. It is time for us to implement the solutions to ocean’s many problems,” he said.

Special Envoy Thomson told a briefing of IMO senior staff that the UN Ocean Conference, held in New York in June 2017, had demonstrated a clear will and commitment by all sectors of the ocean community to support the implementation of the UN’s Sustainable Development Goal 14. SDG14 calls for the world to conserve and sustainably use the resources of the ocean for sustainable development.

“We are all aware of ‘Climate Change’; but we need to talk more about ‘Ocean Change’ and the effects of acidification, warming, plastic pollution, dead zones and so on,” Thomson said. “The world must know that we have a plan to save the ocean. As it stands, SDG14 represents the only universal commitment we have to save life in the ocean for our grandchildren to enjoy. We have a strategy to drive SDG14 and what is required over the next three years is concerted action.”

The UN Ocean Conference resulted in a firm Call for Action declaration, subsequently adopted by consensus at the UN General Assembly, to support the implementation of SDG14. More than 1,400 voluntary commitments have been pledged as a result the conference and these are now being shaped into Communities of Ocean Action.

Special Envoy Thomson said he would be working closely with these communities to ensure the commitments were being developed and implemented into meaningful ocean action.

He said he would be cooperating with Member States and the UN system to optimize the effectiveness of UN-Oceans, the UN’s inter-agency mechanism for ocean action. Equally important, he said, would be his work with civil society, the scientific community, the business sector, and other relevant stakeholders, to coalesce and encourage their activities in support of the implementation of SDG 14.

Thomson emphasized that IMO, as the United Nations agency responsible for developing and adopting measures to improve the safety and security of international shipping and to prevent pollution from ships, had an integral role to play in the effort to meet SDG14’s targets.

IMO has adopted regulations to protect the marine environment from ships, including the International Convention for the Prevention of Pollution from ships (MARPOL), and the Ballast Water Management Convention, which aims to prevent the spread of potentially harmful aquatic invasive species.

IMO is the Secretariat for The London Convention and Protocol, treaties which regulate the dumping of wastes at sea, and these are hosted by IMO. The 2016 Strategic Plan for the London Protocol/Convention has been registered as a voluntary commitment under SDG 14.

IMO also fulfills secretariat functions for the Joint Group of Experts on Scientific Aspects of Marine Environmental Protection (GESAMP), an advisory body of the United Nations. GESAMP has issued peer-reviewed reports on microplastics in the marine environment and on other relevant topics.

IMO is one of the partners in the Global Partnership on Marine Litter (GPML), which is managed by UN Environment, with IMO co-leading on sea-based sources of marine litter together with the Food and Agricultural Organization (FAO).

Peter Thomson was appointed as Special Envoy for the Ocean by United Nations Secretary-General António Guterres in September.