The X-STERN solution from Ulstein was awarded the Next Generation Ship Award at the Nor-Shipping opening conference on 2 June. Innovative ship design is the main criteria in the awarding of this prize.

“Innovation is at the core of what we do, and we are truly delighted to receive this recognition,” comments Gunvor Ulstein, CEO of Ulstein Group. “The offshore industry is experiencing a downturn and eventually oil and gas supplies will come to an end. We do not know what we will be living on 50 years from now, but we do know we will be delivering smarter and sustainable solutions for the future.”

Tore Ulstein, Deputy CEO and Head of Market and Innovation, comments further: “Thinking outside the box and challenging accepted ideas is at the heart of innovation. When we introduced the X-BOW ten years ago, many people commented on the unusual look of the bow and questioned its improved seakeeping characteristics. 100 X-BOWs later, the scepticism has turned into acceptance and several ship designers have presented their own bow designs.” 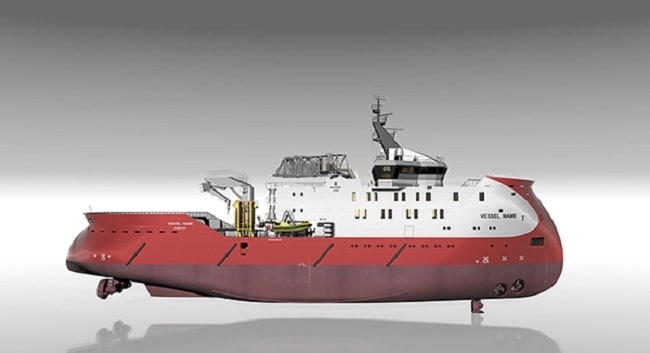 He continues: “The X-STERN is an innovation that developed from the X-BOW way of thinking. It operates in much the same way as the X-BOW, sheltering the work deck, reducing the movement in transit and increasing comfort on board. The stern has less volume and thus a reduced wind impact, than a bow, meaning that the captain will choose to place the stern towards the weather once having reached destination.”

With its focus on innovation, the Next Generation Ship Award recognises the most promising design among the ships that will be at sea in the coming decade and is awarded to the ship project demonstrating the greatest advances and innovation in design. The design is assessed with respect to energy efficiency, innovation, suitability and flexibility, utilisation of technology, safety and security and environmental sustainability.

Eligible projects are those that are contracted but not delivered or are likely to be contracted and built within the next 10 years. ULSTEIN has contracted the first two vessels featuring the X-STERN, which have been put to use on the SX175 designed offshore wind service vessels to be built by Ulstein Verft for Bernhard Schulte.

The X-STERN is a design feature for DP-equipped vessels that increases operability through its positive impact on station-keeping and wave response in harsh conditions. Developed for vessels dependent on best possible motion characteristics, it has a sloping, higher stern, allowing for a sharp stern shape in which the transom plate is replaced by a pointed aft. With the X-STERN, a vessel can stay positioned with the stern facing towards the weather.