Island Venture has been thoroughly tested at sea trial this week. The sea trial is now in the final stage and the ship will return to the yard by the end of the week to be completed.

The sea trial has so far gone as expected. Some challenges will always emerge on sea trials, but we are now well underway with the DP tuning. With hard work, further testing and class punch towards the delivery, we will manage to complete our mission. 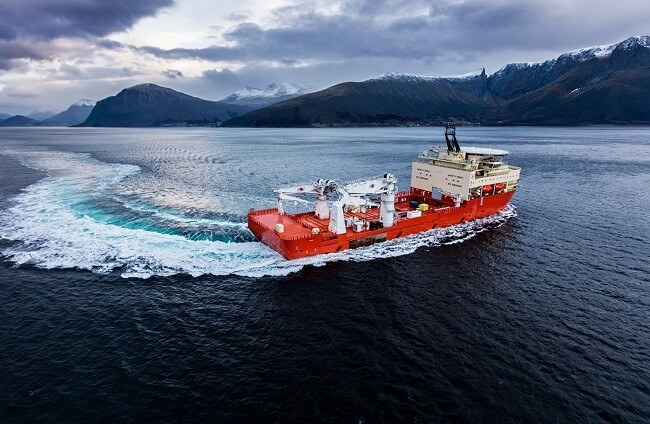 This is the largest ship and one of the most advanced projects so far. I believe we will manage to deliver as agreed thanks to our dedicated employees and suppliers that are currently working night and day to complete the vessel,” reports a tired but happy project manager, Per Svein Brekke from Vartdalsfjorden.

“Island Venture has brought us to a new league in designing and building advanced vessels. We have learned a lot from the project,” says Ulstein Group CEO Gunvor Ulstein.

Project manager Per Svein Brekke has full control, but he must admit that Island Venture with it’s 160 meter length and 30 meter beam is something else.

“We lose sight of what is special when we keep on delivering some of the worlds most advanced vessels, but this ship is quite amazing. She is in her own league, so to say,” says Brekke.

The vessel can accommodate 200 people – It is almost like a hotel, he adds.

The vessel was originally 147.5 metres long with a beam of 28 metres and is now 160 x 30 metres. After the building had started it was decided to increase the deck area and the tank capacity. A 140 tonnes crane with 3,000 metres wire installed, as well as a 400 tonnes crane that can operate at 4,000 metres depth. The cable for the largest crane weighs 330 tonnes and has a diameter of 125 mm. The vessel has three moon pools – two for ROVs and one construction moon pool of 12 x 11.2 metres.

“The extension of the design resulted in many changes and upgrades for the vessel’s systems, as for example the machinery and the electrical installations,” says Brekke.