In 2018, Ulstein Group recorded revenues of NOK 1.89 billion and an operating loss of NOK – 211.6 million. The result was partly caused by low exploitation of capacity in parts of the group, large restructuring expenses and loss on certain projects. 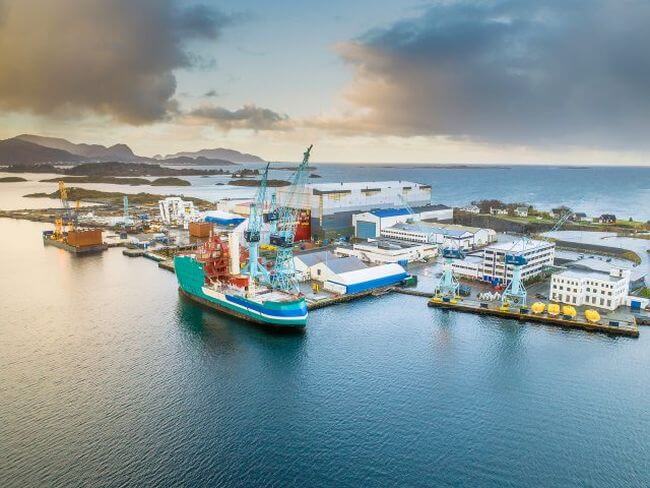 “Ulstein Group and the maritime cluster have been through major changes over the past years. This restructuring has been costly and time consuming,” says CEO Gunvor Ulstein.

“Our figures show an operational improvement in 2018 compared to 2017, however the restructuring process has been very challenging, and we have worked hard to position ourselves in new segments. We expect that these efforts will give results over time,” she says, continuing:

“The orderbook is filled with contracts with new customers, none of them known to us before 2015. There has been and still is a tough competition in getting new contracts. Our ability to understand the customers’ needs, win contracts and carry out the projects with positive margins will be critical”.

Color Hybrid, the world’s largest plug-in hybrid vessels lying at the Ulstein Verft quayside, will be delivered this summer. In the dock hall, we find the first expedition cruise vessel to be delivered to Lindblad Expeditions/National Geographic in 2020, and a sister vessel in the order book with an additional option pending. In addition, Ulstein Design & Solutions has entered into five contracts for building in China with CMHI/ SunStone, and there are five more options pending.

“We have delivered a number of offshore wind vessels over the past few years and we still have one in the order backlog. We believe that the offshore wind market will increase significantly in the years to come and we are well positioned to take part in this. With the additional Lindblad II and the cable laying vessel to be delivered to Nexans in 2021, we are well positioned to create results in the years to come.” Ulstein ends.

Ulstein Group’s main figures for 2018 are: