Seafarers should enjoy the same sort of working conditions and welfare rights as people who work ashore, UK shipping minister Nusrat Ghani told a meeting at the Houses of Parliament on Tuesday 16 January. 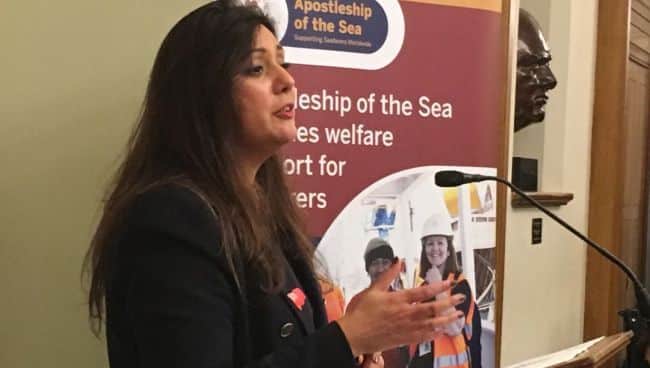 Speaking at the launch of the Apostleship of the Sea’s Life at Sea report, the minister said it was vital to create an working environment in which seafarers feel valued and able to give their best.

‘I believe it is critical that those who work at sea have comparable employment, social and welfare rights to those on land,’ she added.
To support such principles, the government is planning to extend National Minimum Wage legislation ‘to all mariners on all vessels in UK territorial waters’, Ms Ghani said.

‘Safety and employment measures should be seen as an investment in business, and not as red tape or a burden on maritime firms,’ the minister argued.

Ms Ghani said she was concerned about the high rate of suicide among seafarers and the role that fatigue may play in this. ‘Fatigue remains a key concern for the UK, so we have developed a three-pronged strategy through culture change, enforcement of regulations and education,’ she added.

The Apostleship of the Sea’s report highlights the continued importance of ship visiting services and pastoral care for crews, with details of cases involving abandonment, non-payment of wages, stress and mental health problems, bullying and harassment, medical emergencies, and refusal of shore leave.

Key points in the report include: