The shipping industry committed last year to cut greenhouse gas emissions by half by 2050, with an interim 2030 target of 40% carbon intensity below the 2008 baseline. Next month, the IMO is going to discuss possible measures that will assist the low-carbon transition in the industry. Among all the submissions on potential measures, the proposals from France and Greece for prescriptive speed reduction regulation and introduction of a ship fuel consumption cap are expected to be divisive.

The idea of regulating speed limits to slow down ships to cut fuel consumption and carbon intensity of the industry is not new in the IMO; however, so far it has been politically unacceptable due to the direct impact that it might have to trade.

Unfortunately, despite the very positive intention of the proposals to assist in the reduction of emissions, that is not matched in the details and risk leaving gaps in the IMO’s decarbonisation plan. Its implementation and enforcement are also problematic.

If the IMO decides to rely on prescriptive speed regulation to meet its short-term target, it would delay the low-carbon transition and store up greater costs later on for the industry. 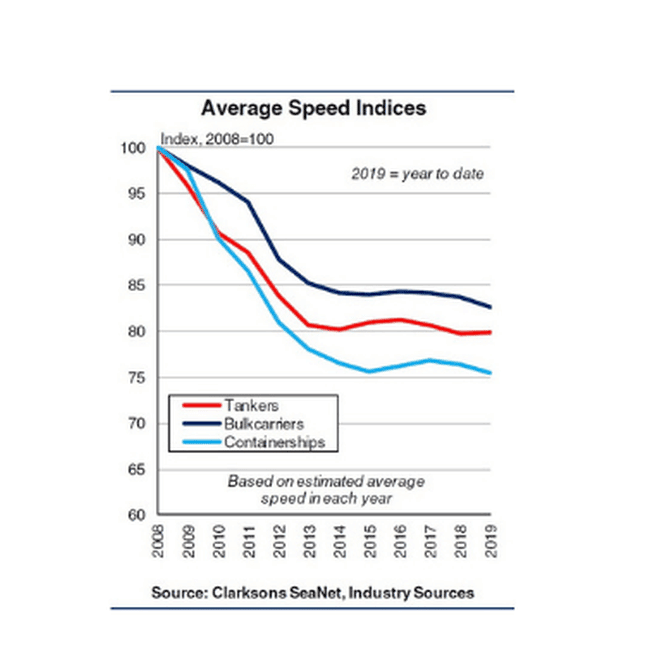 The scale of ambition required for the industry to meet the target set should not be underestimated; therefore, we should incentivise and not penalise those shipowners that have been proactive and have already implemented a number of operational and technological measures to reduce emissions. Unfortunately, the speed limit proposals lack the principle of a level playing field which could present a barrier to innovation.

There is an argument that cutting ships speed further might deliver fuel savings for current ships. However, this is based on speed simulations studies where it is anticipated that ships will always drive at a certain speed. It would not be the first time that when looking on these assumptions from a more realistic setting, the savings could be minimal or even negative. The actual fuel consumption benefits of low speed depend on many factors such as the type and size of the ship, the area of operation, weather conditions, etc. Besides, this would be negated by the loss of capacity which would require additional vessels to be build and recycled at a later stage.

Speed reduction could also lead to a modal shift and higher aggregate greenhouse gas emissions in the case of time-sensitive cargos, particularly in the short sea segment. Some cargos may even shift to other modes, resulting in further increases to overall emissions.

In addition, some ships may call ports that are often tidally constrained where a delay of 1-2 hours could result in a delay of 12 hours to the vessel and additional to the economic harm caused; it could also create emissions during the waiting time for the next tide. Ships operating in coastal tidally influenced trades frequently need speed flexibility to meet, overcome or benefit from points of criticality in their voyage. For example, to achieve clearance over shoals, ability to safely benefit from ‘short cuts’ reducing voyage distance; or the ability to benefit from favourable tidal flows. Similar impacts can also be seen in ports located close to centres of population where there might be restrictions on night-time cargo operations. Another example is the cruise vessels where it will affect their itinerary and require ships to spend more time at sea sailing or waiting outside ports and subsequently consume more fuel and render the entire business model uneconomic.

Another negative impact is the fact that the speed limit will be counterproductive about other IMO regulations as low load engine operation increases emissions of NOx, PM and Black Carbon.

It is also important to note that the average speed of ships is at its lowest ever for the last decade. Therefore, as mentioned above, such a measure will only provide a false reassurance that action in reducing emissions is being taken and distracting the IMO from other effective measures.

I am not saying that speed does not have a role to play. However, that should be speed optimisation and done through a goal-based approach. The IMO should offer shipowners both technical and operational options to give them control on what works best for their business model.

Another point of contention is the proposal to put a cap on how much fuel a ship will be allowed to consume during a given year. This proposal raises a number of questions with regard to its implementation. For instance, which mechanisms will the IMO consider for fuel allocation, will all vessels be allocated the same fuel consumption i.e. efficient and non-efficient vessels? What happens if a ship reaches its limit before the end of the year? Will the vessel not be permitted to be available in the market? What will be the impact on States, especially on island states if by the end of the year ships were not able to trade? If a ship’s ability to trade was restricted towards the end of a compliance period, it may have the effect of driving up freight rates; a market distortion which could be exploited by canny/sharp operators.

The core conclusion is that unless the IMO ensures that there is a level playing field and the right direction on the pathway going forward we might miss the boat. We have set ambitious targets, but we need the IMO to support these with appropriate policy for the industry to realise it. These issues require long-term perceptive and not just short-sighted quick fixes. We need measures to make the targets sets work in real business conditions.