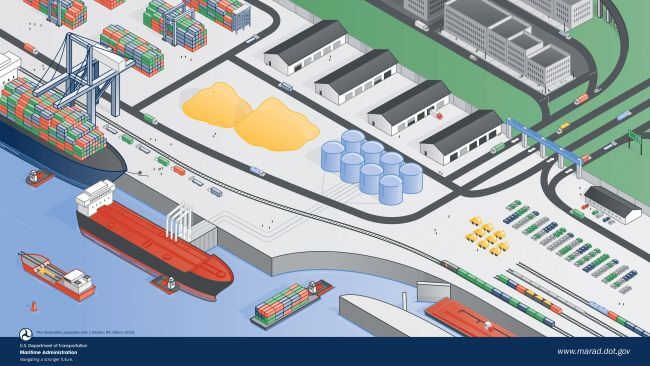 “The designation of marine highways by Congress will help move cargo and people to help grow the economy and shift freight off of congested highways,” said Transportation Secretary Elaine L. Chao.

The new designations and route include:

Port of NY to CT Ports Trailer on Barge: By connecting Brooklyn, NY, Newark, NJ, Bridgeport, CT and other New England ports along the existing M-95 Marine Highway, this barge service is designed to reduce congestion in the NY/NJ port area and on the highways, bridges, and tunnels that connect to Interstate 95 into New England.

M-95 Fernandina Beach to Charleston Barge Service: A new barge service will help the Port of Fernandina in Nassau County, the northernmost county on the Atlantic coast in Florida, service all coastal seaports on the Atlantic, including Charleston, SC, and contribute to the reduction of truck traffic on I-95.

Port of Oswego Great Lakes Container Service: The designation will support the Port’s goal of expanding its reach into national containerized cargo movement, which should help to reduce on-road truck trips and ease congestion at two international border crossings (Buffalo and Detroit/Windsor).

Port of Morrow Barge Service Extension: The expansion of existing service will support the rural economy and increase the economic competitiveness of the region by reducing transportation costs and rail and highway congestion through new opportunities for barge shipping to and from the Port along M-84.

Seattle – Bainbridge Island Ferry Service: This service offers a faster, more reliable, and safer alternative to the circuitous road connections where freight and passenger vehicles would otherwise travel along Interstate 5 (I-5) and State Route (SR) 16, as well as SR 3 and SR 305.

American Samoa Inter-Island Ferry Service: As a newly designated Marine Highway route and designated project, the Port of Pago Pago will enhance both intra-island and inter-island transportation to the outer islands, including the movement of freight, to ultimately promote the development and growth of these relatively isolated areas.