The Energy Efficiency Award pays tribute to the ship that makes the greatest contribution towards energy efficiency in relation to its function or operation. This 95,000 dwt bulk carrier Harvest Frost was designed by Mitsubishi Heavy Industries, which provided most of its innovative features. 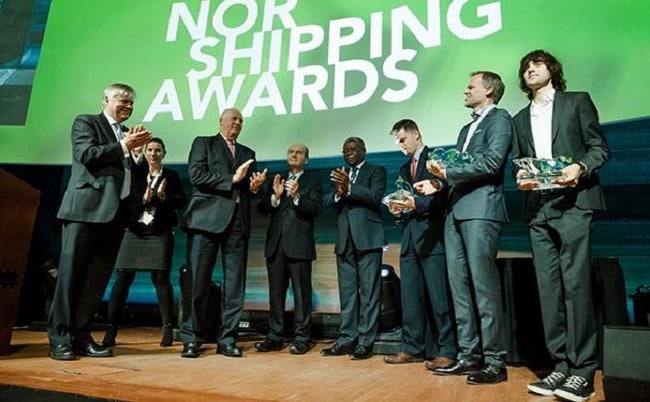 The vessel also features a new bow shape designed to reduce wave-making resistance. For propulsion, it has adopted an innovative system that effectively converts the main engine power into propulsion power by positioning fins forward of the propellers and placing special grooves in the propeller boss cap.

The Next Generation Ship Award honors the most promising design for ships that will be at sea in the coming decade. Ulstein’s new stern design reduces acceleration, pitch and heave, improves comfort and safety, and widens the operational window.

X-STERN has already been commissioned for an SX175 offshore wind service vessel to be built at Ulstein Verft in Norway for German owners Bernhard Schulte/WINDEA Offshore. X-STERN’s sharp shape allows a vessel to stay positioned with its stern facing towards the weather, even in harsh conditions.

The Young Entrepreneur Award honors an under 40-year-old professional who has founded a successful company which tackles challenges or solutions in a new way. Boyan Slat devised a system with an array of floating barriers that catch and concentrate ocean debris to enable a platform to efficiently extract plastic afterwards.

In 2014, the concept turned out to be a technically feasible and financially viable method to clean up half the Great Pacific Garbage Patch in 10 years’ time. Raising $2.2 million through crowdfunding, the organization was able to enter the pilot phase of the project. The system will first be deployed in 2016, with waters between the Japanese mainland and Korean Peninsula proposed as the location.

An independent jury was set up for each award. Organizations represented include, among others, the International Maritime Organization, DNV GL and the Norwegian Marine Technology Research Institute.