You are here: Home › Shipping News › Two Massive Shipwrecks As Big As The Vasa Ship Discovered Outside Vaxholm
TwitterFacebookLinkedInPinterestBuffer

Two large warships from the 17th century have been found by divers outside Vaxholm, an island near Stockholm. Archaeologist divers from the new museum Vrak – Museum of Wrecks are hoping to have found the Vasa’s sister ships.

This week, maritime archaeologists at Vrak – Museum of Wrecks, the new museum that is part of Sweden’s National Maritime and Transport Museums, have investigated historical remains in a depression in the sea bottom, outside of Vaxholm.

The discovery was astonishing – the maritime archaeologists first discovered a shipwreck as big as the Vasa ship. It was a 17th-century warship that was most likely purpose-sunk to make it harder for intruders to take the sea route to Stockholm. 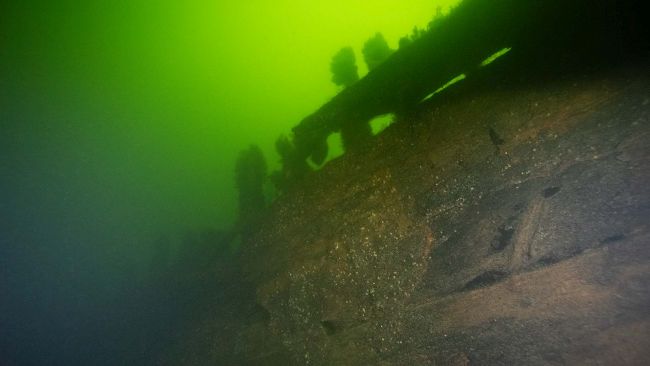 The stern is broken, but the bow is better preserved and sticks up roughly 5 metres from the bottom of the sea. The measurements taken and the design details recorded both tally well with the Vasa’s.

“It was like swimming around the Vasa ship,” says maritime archaeologist Jim Hansson enthusiastically.

The next day, the team found another shipwreck – probably larger than the first – in the lengthened section of the first wreck they had found.

The maritime archaeologists hope they may have discovered the Vasa’s sister ship, the Apple, one of several large warships that, according to historical sources, were sunk outside Vaxholm during the second half of the 17th century. Among them are likely the Crown and the Sceptre, two ships built in a series together with the Vasa during King Gustav Adolf’s equipping of the Swedish naval fleet.

During the dives, the archaeologists took several samples of the wood in the wrecks. These samples will now be analysed in order to date and hopefully identify the wrecks.

“The detective work has only just begun,” Hansson says.

The dives were carried out by the National Maritime and Transport Museums in cooperation with the Swedish Navy.

Crowley To Deploy One Of The Most Powerful Tugs ‘Veteran’ In Port Of LA/Long Beach
Want to share your tips and advice? Got questions? Visit the community forum to ask questions, get answers, meet people, and share your tips!