Herbert Julian, who served as chief engineer of the vessel from Aug. 3 to Sept. 4, 2015, was convicted of two felony counts under the Act to Prevent Pollution from Ships (APPS) and for obstruction of justice. Panagiotis Koutoukakis, chief engineer from Feb. 1 to Aug. 3, 2015, was convicted of two felony counts, one for APPS and another for falsifying records. 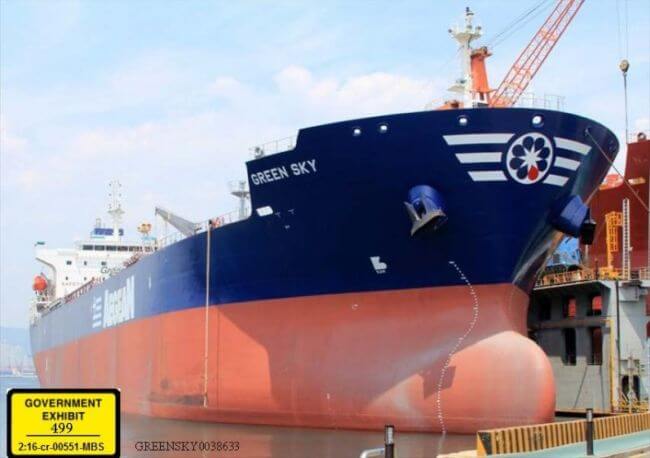 In addition, it was revealed in court documents, which were unsealed after the verdicts were rendered, that Aegean Shipping Management, S.A., a foreign company with operations in Greece that acted as the Green Sky’s operator, previously pleaded guilty to a violation of the APPS and obstruction of justice.

“This case involved egregious violations of U.S. and international laws that are key to protecting the oceans from pollution, and deliberate efforts to mislead Coast Guard officials about these criminal acts,” said Acting Assistant Attorney General Wood. “Now these defendants have been held accountable under the law by a jury of their peers. The Department of Justice will continue to aggressively prosecute criminal acts that pollute the oceans.”

“With Charleston serving as one of the largest ports on the Eastern seaboard, working vessel pollution cases with the Environmental Crimes Section is an important focus for our office,” said U.S. Attorney Beth Drake, District of South Carolina. “Through criminal charges, we can deter those who would dump oily wastes into the world’s oceans and use false documents to cover it up.”

“The Green Sky case stresses the vital importance of USCG environmental protection missions with regard to pollution from ships,” said Captain Gary L. Tomasulo, Commander, U.S. Coast Guard Sector Charleston. “We are extremely proud of our team of marine safety professionals and the Coast Guard Investigative Service which were an integral part of investigating these occurrences and referring them for enforcement action.” 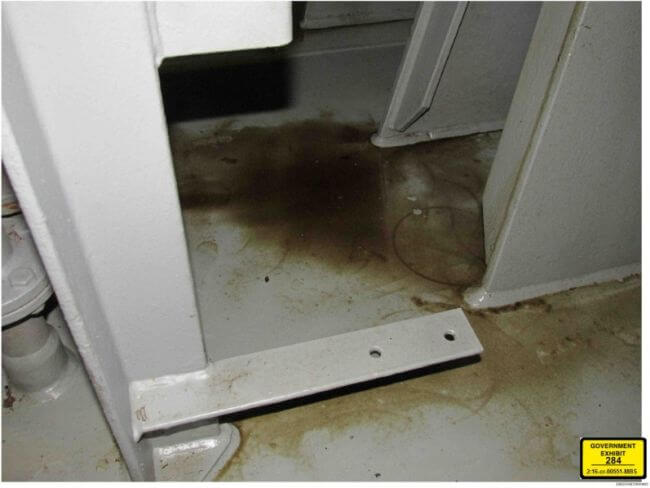 The Green Sky is a large, oceangoing chemical tanker flagged in Liberia. The vessel first set sail in July 2014. The operation of marine vessels, like the T/V Green Sky, generates large quantities of oil-contaminated waste water. This particular vessel had unusual internal leaks that produced greater quantities of oily waste than a normal ship of its age and construction.

Oily bilge waste must be removed from the vessel lest it fill up the bottom of the Engine Room and cause damage to equipment and jeopardize the safe handling of the ship. However, the law does not permit an oceangoing vessel to discharge these oily wastes directly into the sea.

The evidence presented to the jury showed that the Green Sky was regularly pumping contaminated and oily water directly overboard. None of these discharges were disclosed as required. The oil record book of the Green Sky was falsified to cover-up illegal overboard discharges of oily wastes from February to August 2015.

Methods of falsification included omitting illegal bypass operations, claiming that the oil water separator was used when it had not been, and a series of false entries regarding the levels of the bilge holding tank, which were designed to further the cover-up. While most of these discharges occurred in international waters, evidence at trial revealed that at least two of these discharges were within the Exclusive Economic Zone of the United States during the ship’s voyage from Pascagoula, Mississippi, to Houston, Texas in May 2015. 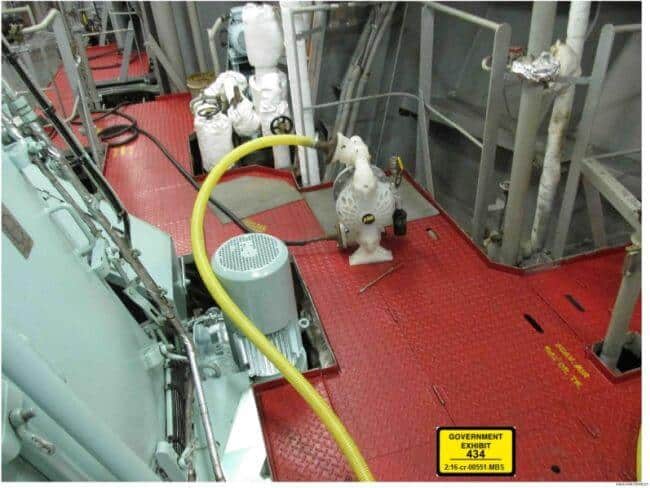 The evidence presented during the fifteen-day trial demonstrated that the chief engineers covered up illegal overboard discharges that took place through two systems of “magic” hoses and a separate “magic” valve system designed to bypass the ship’s oil water separator. Koutoukakis and Julian falsified the oil record book to hide their illegal discharges.

The vessel arrived in Charleston, South Carolina on August 26, 2015, when the false record was presented to the U.S. Coast Guard during an inspection of the vessel. The U.S. Coast Guard was tipped off by three whistleblowers who came forward to report the crimes and ask for protection from U.S. authorities.

By January 2016, it was determined that the former chief engineer Koutoukakis likely had information regarding the ongoing investigation into the Green Sky. Koutoukakis was later apprehended in Savannah, Georgia on a material witness warrant. Koutoukakis was subsequently indicted after further investigation revealed his substantial involvement in illegal discharges and records falsification.

In addition, Julian was convicted of obstruction related to false statements that he made regarding the ship’s sounding log, which is a document that can be used to check the veracity of the oil record book. Testimony at trial revealed that Julian hid the log prior to the Green Sky’s arrival in Charleston and then lied to the Coast Guard about the vessel having a sounding log.

Prior to the initiation of the trial, on November 22, 2016, the Green Sky’s operator, Aegean Shipping Management, S.A. pleaded guilty to one APPS count for the illegal discharges and one obstruction count based on misrepresentations made by the vessel’s captain to the U.S. Coast Guard during the August 2015 boarding. The corporate vessel operator had been indicted along with the individuals on July 15, 2016. The plea materials were previously sealed to protect the integrity of the jury and the witnesses in the trial against the individual defendants.

The unsealed documents revealed that the operating company agreed to pay a financial penalty of $2 million, which includes a criminal fine and a smaller community service component directed toward the Gray’s Reef National Marine Sanctuary. The company will also be sentenced to probation and an environmental compliance plan. Sentencing of the company and defendants Julian and Koutoukakis will take place at a date that will be set by the court. At trial, the second engineer Nikolaos Bounovas was acquitted of all charges against him. The previously convicted Captain, Genaro Anciano, testified at the trial. His sentencing has yet to be scheduled.

This case was investigated by the U.S. Coast Guard Sector Charleston and the Coast Guard Investigative Service. The USCG Marine Safety Lab was critical to the analysis of oil samples taken from the vessel. With the support of Coast Guard Legal District Seven, the case was prosecuted by Christopher L. Hale and Kenneth Nelson of the U.S. Department of Justice’s Environmental Crimes Section and AUSA Matt Austin from the U.S. Attorney’s Office for the District of South Carolina. Richard Udell, also of the Environmental Crimes Section, provided substantial assistance with regard to the corporate plea deal.

A multi-national treaty, the MARPOL Protocol, and implementing U.S. law required the Green Sky to first process the oily bilge waste through a filtration machine, known as an oil-water separator. Before the bilge waste can go overboard, the law requires that any remaining petroleum should be reduced to a concentration of 15 parts per million (ppm) or less. Bilge waste that contains 15ppm or less of petroleum does not produce a sheen and looks like clear water when held up to the light.

One of the principal ways that the MARPOL Protocol ensures that international vessels comply with the oil water separator requirement is through the mandate to accurately maintain the vessel’s oil record book. The oil record book is an official ship’s log that records various types of internal transfers and discharges of fuel, oil residue, and oily bilge wastes. Under MARPOL, when a ship comes to a U.S. port, its oil record book is subject to inspection.

When the oil record book is falsified, it makes it extremely difficult for port control officials (in the United States, the U.S. Coast Guard) to adequately assess treaty compliance and the safe and environmentally sound operation of the vessel.