Two fishermen whose boat caught fire off the coast of Land’s End, UK, on 16 July successfully evacuated into a Survitec liferaft and from there were taken ashore by Falmouth Coastguard. The pair activated the Survitec Seasava liferaft and abandoned vessel Ocean Harvest, when it caught fire.

The coastguard received emergency calls at around 15.25 BST, and two lifeboats, one from Penleee and one from Sennen, were dispatched alongside a rescue helicopter, but not before the fire completely took hold and destroyed the fishing vessel. Neither of the fishermen were injured nor suffering from smoke inhalation.

Mark Hart, Sales Director, Survitec said: “Survitec is very pleased to hear that the two fishermen’s evacuation off Land’s End on 16 July was successful and that they are both safe and well. Incidents such as this serve as a reminder of how important it is to carry the correct life-saving appliances (LSAs) onboard. Survitec urges the industry to ensure that their liferafts and other LSAs, are maintained, tested and serviced according to the manufacturers’ guidance”. 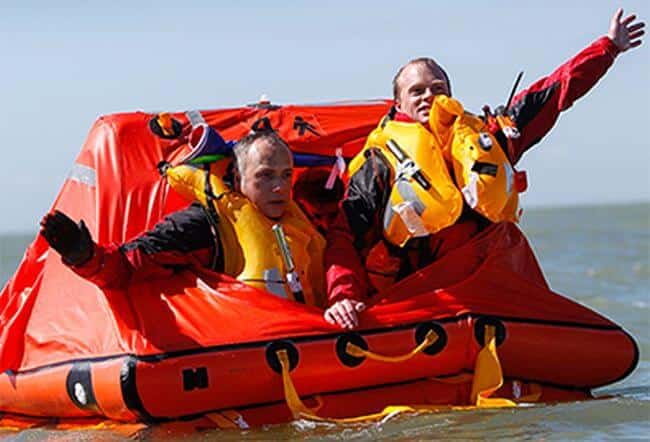 Ocean Harvest was equipped with a SOLAS-approved Seasava Pro-ISO liferaft, which was developed for smaller vessels with limited deck space and is required to be serviced at three-year intervals.

Whilst UK-flagged fishing vessels of 12 m-length or more are required to carry a liferaft there is no international regulation that governs their global carriage.

Chapter 5 on safe navigation in IMO’s SOLAS (Safety of Life at Sea) Convention applies to all vessels, including fishing vessels, however, they remain exempt from other chapters such as those relating to LSAs. A move to introduce an international safety standard for fishing-vessels of 24 m-length or more is underway, with the 2012 Cape Town Agreement awaiting entry into force pending a sufficient number of signatories.

Mark Hart said: “We support IMO’s work on fishing vessel safety and encourage member states to ratify the Cape Town Agreement to ensure that all fishing vessels are required to carry liferafts and other appropriate life-saving appliances”.