The first visual affirmation of a new era of growth arrived at The Port of Philadelphia. PhilaPort received its first two super post-Panamax cranes at the Packer Avenue Marine Terminal after a ninety-day journey from Shanghai, China. Manufactured by Shanghai Zhenhua Heavy Industries (ZPMC), the new cranes will be 13 feet taller than the neighboring Walt Whitman Bridge with its boom in the upwards position. 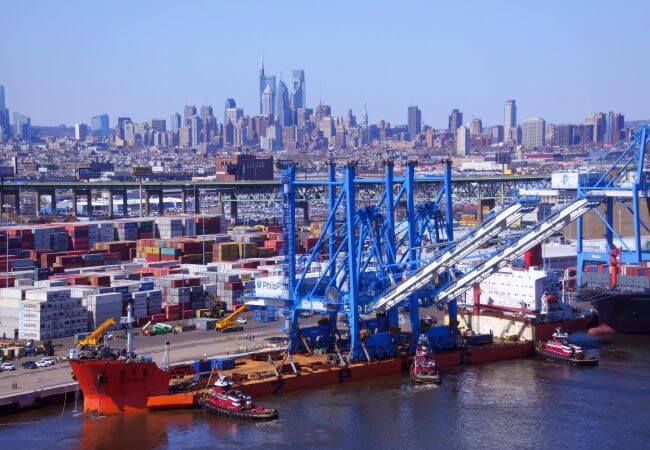 In the past decade vessel size has grown exponentially creating a new class of container ships known as ULCVs (Ultra Large Container Vessel) with a 10,000 to 20,000 container capacity. Even before the arrival of the cranes, this past winter PhilaPort saw the largest containership that ever called the Port the M/V MSC Shuba B a 12,200 TEU vessel. These new container gantry cranes will be capable of discharging containers from these new larger vessels and have a cost of $12m each.

“For over a year we have been working hard to prepare the terminal for these cranes and it is great to see them here.”, said Jeff Theobald, Executive Director and CEO of PhilaPort. “Last year we hit an East Coast record of 19% container growth. To sustain that type of growth, these new cranes are a necessity.”

“The arrival of the cranes is a perfect example of public/private investment into the State’s critical infrastructure,” said Governor Tom Wolf. “Every transportation professional knows how important speed to market is to logistics. These new cranes will ensure that we keep pace with other U.S. seaports and allow PhilaPort to load and discharge cargo with state-of-the-art equipment.”

In November of 2016, Governor Wolf announced a $300 Port Development Plan. As part of the plan, Packer Avenue Marine Terminal operator, Astro Holdings, agreed to purchase one crane, as well as undertake other planned improvements to the facility.

“The Port has a huge impact on the economy of the entire region, and these new cranes are another sign that the Port is building a very bright future,” said Tom Holt, Jr., President of Astro Holdings, the Packer Avenue terminal operator. “The cranes allow us to handle more cargo from bigger ships, and since we’re already setting records for cargo growth at Packer, the cranes are arriving not a moment too soon.”

PhilaPort, The Port of Philadelphia, is an independent agency of the Commonwealth of Pennsylvania charged with the management, maintenance, marketing and promotion of publicly-owned port facilities along the Delaware River in Philadelphia, as well as strategic planning throughout the port district. PhilaPort works with its terminal operators to modernize, expand and improve its facilities, and to market those facilities to prospect port users. Port cargoes and the activities they generate are responsible for thousands of direct and indirect jobs in the Philadelphia area and throughout Pennsylvania.