MSC Sveva was operated with 7 ship-to-shore cranes, handling at peak moments more than 250 containers per hour. The volume of 30,744 TEU achieved at TTI vastly exceeds similar records that were recently set in ports like Gdansk or Antwerp, whose records currently stand at 20,081 TEU and 13,405 TEU respectively.

This achievement is set in the context of a market that has been significantly impacted by the COVID-19 situation, with import container volumes in the San Pedro bay decreasing almost 13% during the first quarter of 2020. 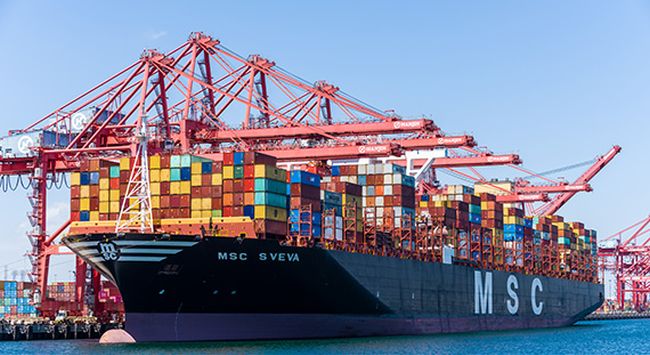 Terminal operator TTI is not new to record setting. In May 2018, TTI broke the American productivity record when it handled 564 containers with a single crane in one shift. In April this year, TTI handled MSC Mia, one of the biggest container vessels in the world and the biggest to have ever called a U.S. port. With this week’s MSC Sveva call, TTI is again raising the bar for the container handling industry in the U.S.

“We are motivated by the opportunity to service these mega-class vessels while continuing to provide the level of service our customers expect and deserve. It is exciting to see the commitment MSC has made in this market and TTI is committed to seamless operational execution for all of our supply chain partners,” said Dan Bergman, Vice President of Operations at TTI.

TTI is 80% owned by Terminal Investment Limited (TiL), a subsidiary of MSC Group, with the remaining 20% owned by Hyundai Merchant Marine CO.

On June 8, ILWU workers at Total Terminals International (TTI) set a new record for highest volume of container movements while working the MSC Sveva. 17,080 containers were handled – the equivalent of 30,744 TEUs, the highest volume reached in North America. Watch: pic.twitter.com/8Si0zA2akh