TT Club and BSI have issued the second edition of their report on global cargo theft, the first to cover a full year. Highlighted findings include: theft from road vehicles once more accounts for the highest proportion at 84%; Slash and Grab the largest type of cargo theft at 26% globally but with significant regional variations; the combination of food, beverage, alcohol and tobacco making up the most common commodity group at 34% and South America topping the regional analysis of median value for each theft at $77,000.

TT Club’s Mike Yarwood, explains the rationale behind the initiative, “Our report brings together threat and intelligence data from BSI’s supply chain security country risk intelligence tool, SCREEN and TT Club’s insurance risk management and loss prevention insights. It demonstrates the shared goal we possess of educating supply chain professionals in the threat of cargo theft across the globe. We aim to engage in a proactive approach in preventing cargo crime and also minimising the financial loss resulting from cargo crime.” 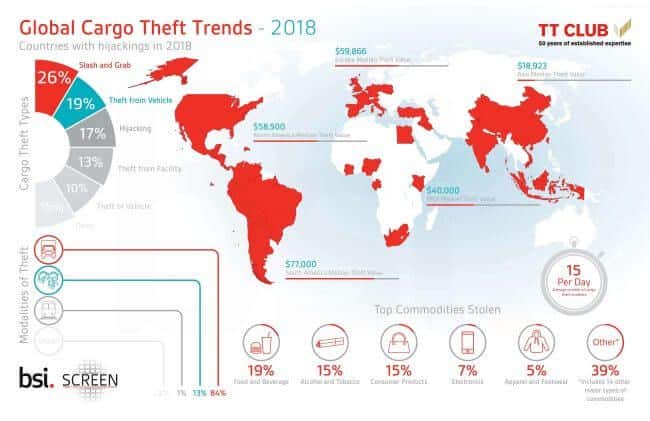 The report, which is available as a free download https://www.ttclub.com/loss-prevention/publications/tt-club-bsi-cargo-theft-report-2018/ analyses cargo theft by modality, theft type (modus operandi), commodities targeted and the value of losses across the major regions of the world. Please refer to the Infographic attached.

While the research found consistency across the regions in terms of the most common modality involved (road transport) and in the commodities targeted, there was some variation in the median value of the cargo affected. This ranged from just under $19,000 in Asia to around $60,000 in both Europe and North America to a high of $77,000 in South America.

The methods used in the majority of cases, however, varied significantly across the regions. The global aggregation resulted in Slash and Grab at 26% topping the list, with Theft from Vehicle (19%) and Hijacking (17%) making up second and third spot. In North and South America Hijacking was the most common method at 37% and 52% respectively. In Asia methodology was quite different with Theft from a Facility being the most common, at 43% compared with just 19% from Hijacking.

Yarwood goes on to say “In particular we would wish to emphasise The Insider Threat. As security measures become more sophisticated and widespread in practice, criminal organisations are increasingly recruiting employees of targeted companies to gain data, cargo information, delivery routes and destinations and access to IT systems. Due diligence in recruiting and managing staff is paramount. In general full or part-time salaried staff are less of a security risk than sub-contractors.

EU Member States In Call To End Crippling Reporting Formalities For Ships
Want to share your tips and advice? Got questions? Visit the community forum to ask questions, get answers, meet people, and share your tips!