TSUNEISHI SHIPBUILDING Co., Ltd. completed the construction of its first TESS38 “WECO JOSEFINE” at one of its overseas shipyards, TSUNEISHI HEAVY INDUSTRIES (CEBU), Inc. and delivered it to the shipowner on January 15th, 2018. This first “TESS38” 38,300-tonne bulk carrier is also capable of log transport and provides greater cargo capacity by realizing energy savings.

The “TESS38” is a new handysize carrier in the TESS series*1, under which over 400 completed vessels have been delivered. Three metres longer than its predecessor, the TESS35, this new vessel has a total length of 180 metres, enabling an increase of 3,000 tonnes in dead-weight capacity for more efficient transport. Designed to carry a wide range of cargo, including logs, grains, coal and iron ore, the vessel is standard-equipped with a cargo securing the device to secure logs on deck and four deck cranes. The cargo hatches on the cargo holds are all fitted with end-folding type hatch covers, and the semi-box type holds themselves are well-suited to the transport of steel products, realising excellent handling efficiency and maintainability. In addition, we have increased fuel efficiency by 15.4% over our handysize bulk carriers constructed in the 1990s by equipping the ship with MT-FAST*2 (increases propeller propulsion efficiency) and an electronically-controlled engine, and have made the vessel environmentally-friendly through measures such as fitting a Ballast Water Management System (BWMS). 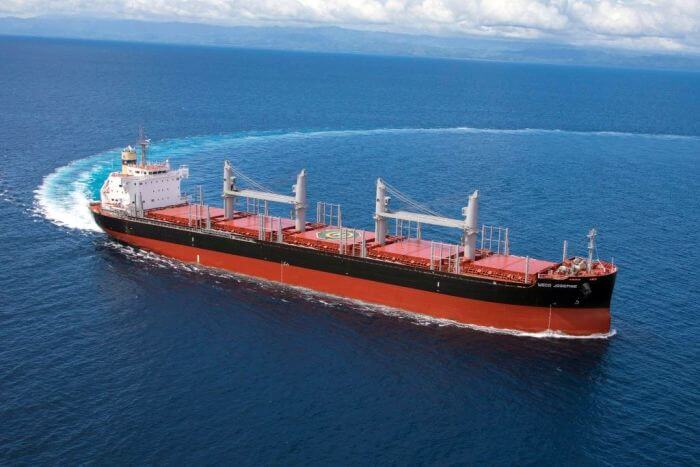 *1 TESS (Tsuneishi Economical Standard Ship) Series
The series had its beginnings in the TESS40, a 40,000-tonne bulk carrier, first completed in 1984. Subsequently, the lineup was expanded to include the TESS45, TESS52 and TESS58 variations. With the launch of the “TESS64 AEROLINE” in May 2014, and the “TESS999” in December 2017, the total number of completed ships has surpassed 400.

*2 MT-FAST
An energy-saving device that fits multiple fins to the front of the propeller to control the water flow and enable propulsion efficiency improvements of approximately 4%. Developed in collaboration with MTI Co., Ltd., a company in the NYK Group.

Marking its 100th anniversary in 2017, TSUNEISHI SHIPBUILDING (Fukuyama, Hiroshima, Japan) is the anchor company of the TSUNEISHI Group, which mainly engages in shipbuilding and maritime transport. With manufacturing bases in Japan (Tsuneishi Factory, the HQ) and three overseas factories in the Philippines, China, and Paraguay, the company builds container carriers, tankers, 30,000-tonne to 180,000-tonne class bulk carriers, cruise ships and other ships.