TRASMEDITERRANEA has become the first carbon neutral shipping line that offsets all of its greenhouse gas emissions as part of its commitment to sustainability and the saving of the environment. In this sense, the company has taken a step further in its pledge to be a company that is concerned with the reduction of its carbon footprint, becoming a leading international shipping company.

In 2016, for the first time, the company was able to offset the greenhouse gas emissions that could not be reduced via the acquiring of emission reduction certificates, granted by the United Nations Framework Convention on Climate Change (UNFCCC), stemming from wind projects in Mexico. 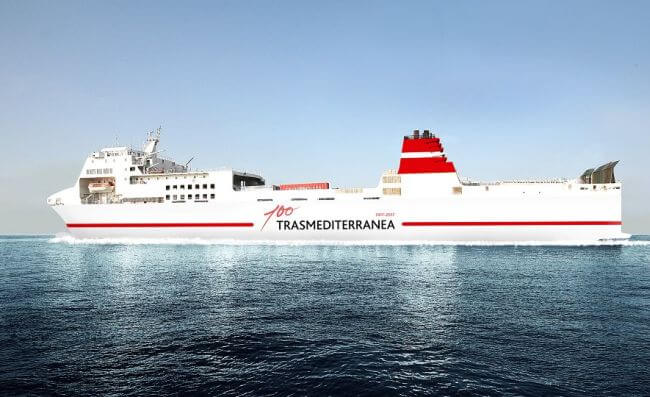 To determine the shipping line’s carbon footprint, all of the scope I and II greenhouse gas emissions have been accounted for in such a way that includes all the direct emissions generated by the company’s activities and the indirect emissions which come from the electricity and fuel consumption and the heating and refrigeration systems.

Despite the fact that maritime transport is considered to be one of the forms of transport with the least environmental impact, far less that air or road transport, its propulsion is based on a combustion process, and therefore greenhouse gas emissions are generated which encourage climate change.

TRASMEDITERANEA, as part of its commitment to sustainability, has an action plan designed to minimise the impact of its activity. The use of non-abrasive paint on ships is one of the measures that the company has adopted. Since 2011, the hulls of 8 ships have been painted with special paint which leads to less hydrodynamic resistance in their drive. This measure has already demonstrated achievable reductions of around 6% of energy consumption and CO2 emissions.

Efficiency innovations have also been applied to the propulsion systems. Last year, the propulsion system of the Jose María Entrecanales ship was updated. A new system, developed by Rolls-Royce, was installed, which conveniently directs the wake and improves hydrodynamic resistance. At the same time, the design of the propeller blades was optimised, adapting them to the new system and further improving the propulsion efficiency. The result of these two measures is an increase in propeller thrust and a decrease in drive resistance, thus improving the ship’s energy consumption during its journeys and reducing CO2 emissions.

TRASMEDITERRANEA continues to be committed to the fight against global warming and within the coming years it is envisaged that new, less polluting fuels will be introduced. Furthermore, in the new, latest generation ferry that is being build, it is expected that a modern catalyst system will be incorporated which reduces greenhouse gas emissions.

Likewise, the company will continue to offset those emissions that cannot be reduced, investing at all times in sustainability.