South Africa’s busiest port will soon take delivery of its first new tug – the sixth of nine powerful new vessels to roll off the production line in the port city of Durban, on time and within budget. Named UMBILO, the vessel was launched at an official ceremony in Durban on Friday, 26 May 2017. Executive Mayor of eThekwini, Councillor Zandile Gumede, performed the ceremonial duty of Lady Sponsor to christen the vessel in line with maritime tradition. 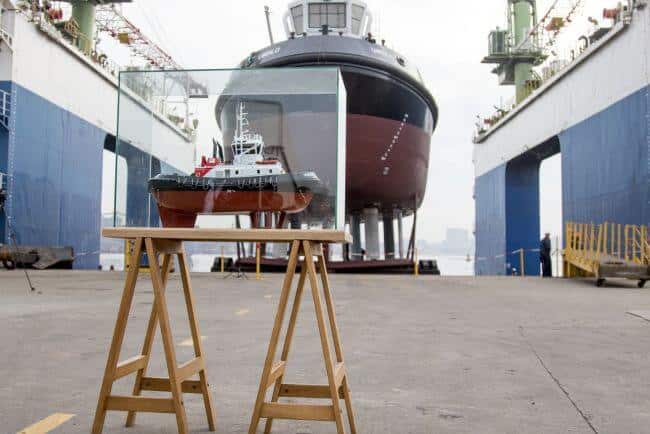 “Over the past few years, the Port of Durban has seen larger vessels calling at the port. This has put a strain on our marine fleet. Currently the port has a total of eight tugs of which four are old shuttle tugs with only 32 and 38 ton bollard pull power,” he said.

As a result of the tug shortage the port has been deploying a five tug operation to help guide vessels into the port instead of the industry request to use a six tug operation.

Having a new and a powerful tug in the port will release pressure on the port’s marine operations and speed up turnaround times for vessels calling at the port. 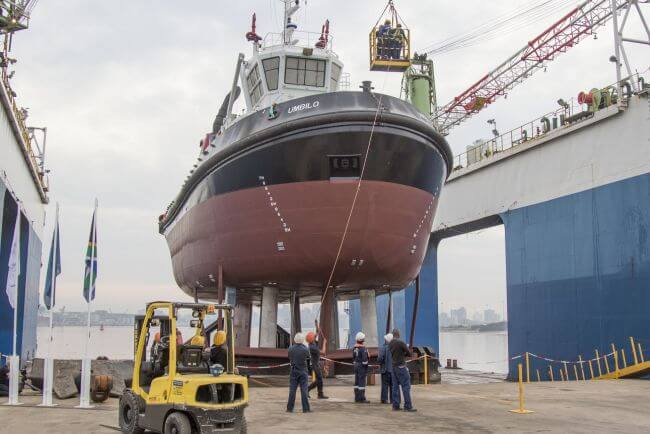 Speaking at the naming ceremony, Vallihu said it was essential to have well-trained people in place to support Transnet’s major drive to ramp up infrastructure and efficiency at South Africa’s ports. Transnet has set aside a record-breaking R7,7 billon for training over the next 10 years. The port authority will contribute in excess of R56 billion of capital expenditure under Transnet’s rolling R300 billion-plus Market Demand Strategy, or MDS, which is now in its fifth year.

Vallihu again praised the work of Southern African Shipyards, which he said was playing a proactive role in helping to unlock the potential of the Ocean Economy.

The nine tugs are being built for TNPA over three and a half years, as part of a wider fleet replacement programme that also includes new dredging vessels and new marine aviation helicopters. The programme is aimed at improving operational efficiency in the ports.

TNPA’s new fleet of nine tugs are each 31 metres long with a 70 ton bollard pull. They feature the latest global technology such as Voith Schneider propulsion which makes them highly manoeuvrable.

UMBILO is among four tugs that will be deployed to beef up the marine fleet in KwaZulu-Natal’s ports of Durban and Richards Bay. Five tugs have already been delivered to Port Elizabeth, Saldanha and Richards Bay.

Captain Dies On Board At Anchorage Near Port Of Durban