American shipping company, TOTE Maritime Puerto Rico, has returned very positive reports on its LNG-powered containerships, ‘Isla Bella’ and ‘Perla del Caribe’ as they approach the third anniversary of commencing operations. The 3,100-teu sister ships serve the route between Jacksonville, Florida and San Juan, Puerto Rico and are notable for being propelled by the first ME-GI dual-fuel engines produced by MAN Energy Solutions.

Tim Nolan, President and CEO of TOTE noted “The relationship between MAN and TOTE has been strong with excellent collaboration from the top level all the way to the engine room, and that continues. TOTE is proud to be an LNG first mover. We are committed to environmental responsibility, especially in terms of clean emissions that preserve the perfect areas of the Caribbean that our vessels operate in. As we enable the Jones Act trade, we see nothing but enduring benefit for the people in Florida and Puerto Rico over the next 25-30 years of these ships’ lives.”

Peter Keller, Executive Vice President of TOTE, said: “The LNG fueled ME-GI engine represents TOTE’s commitment to environmental stewardship. Importantly, LNG as a fuel eliminates SOx and particulate matter, significantly reduces NOx and –increasingly importantly – contributes to the reduction of green house gases. This gives us the ability to move forward aggressively in terms of air quality which is especially important in the pristine areas of the Caribbean and Florida where our vessels operate. 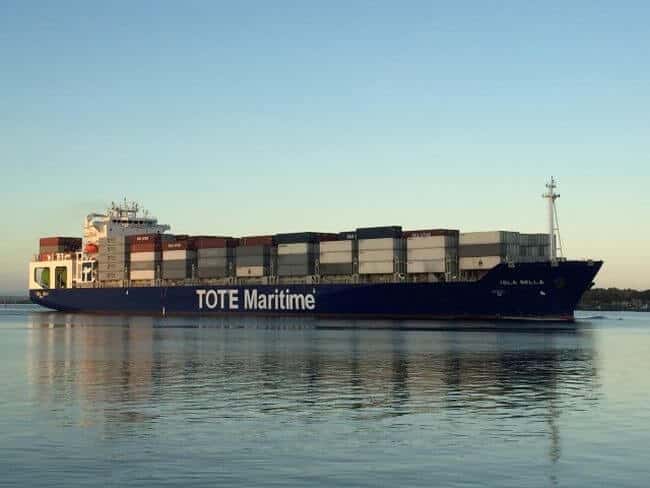 LNG is the fuel of choice for many operators going forward and, in combination with this very reliable dual-fuel technology, provides the quality benefits that we’re all looking for.”

He continued: “Acting as a pioneer and adopting new technology early in its lifetime always bears an element of risk, but our belief in the ME-GI’s concept has proved justified.

Wayne Jones, Chief Sales Officer and member of the Executive Board, MAN Energy Solutions, said: “The development of the ME-GI engine is one element of what we call the ‘Maritime Energy Transition’. Essentially it is our call to action to reduce emissions and establish natural gases as the fuels of choice in global shipping. We strongly promote a global ‘turn to gas’, driven by the IMO, and a common approach by the shipping industry and politics to invest in infrastructure development and retrofits. TOTE is a pioneer in the adoption of LNG and acts as an important reference for how to execute dual-fuel propulsion optimally.”

Bjarne Foldager – Vice President, Sales & Promotion, Two-Stroke Business at MAN Energy Solutions – said: “With over 200 ME-GI units ordered or already in service, the ME-GI engine has gathered references in every major marine segment and, as confirmed by TOTE’s experience, is mature technology. The ME-GI continues to act as standard bearer for environmentally friendly, reliable propulsion technology with its seamless switching between fuels and elimination of methane slip, and we look forward to developing the concept even further in the future.

Foldager added: “Indeed, when you add in MAN Energy Solutions’ entire portfolio of dual-fuel engines, we have confirmed 250+ sales. These all run on LNG or other, clean fuels such as LPG and methanol, testament to our leadership within this critical market segment.”

TOTE also reports that the six MAN 9L28/32DF auxiliary engines aboard the containerships have performed as well as their main counterparts.

In related news, TOTE’s Alaska division., has also contracted MAN PrimeServ – MAN Energy Solutions’ after-sales division – to convert its ‘North Star’ and ‘Midnight Sun’ RoRos to dual-fuel operation on LNG. The vessels are both currently powered by 4 × MAN 58/64 engines and will be retrofitted to MAN 58/64 retrofit units.

Apart from his role with TOTE, Peter Keller is also Chairman of SEA/LNG, the multi-sector industry coalition created to accelerate the widespread adoption of LNG as a marine fuel. MAN Energy Solutions is also a member of the coalition with Stefan Eefting, Senior Vice President and Head of MAN PrimeServ, Augsburg, acting as a member of its Board of Directors. The entity’s vision is to create a competitive, global LNG value chain for cleaner maritime shipping by 2020.

In this context, Keller said: “As a coalition, SEA/LNG is expanding, which illustrates the momentum behind the use of LNG as a marine fuel. Our members span the entire LNG value chain and recognise that by pooling knowledge and working together, we can help drive the change needed across the marine transportation system. We’re showing the market that LNG works well, and continues to work well.”

Apropos of this, TOTE Maritime is playing a leading role in the expansion of LNG infrastructure locally with JAX LNG, its LNG supplier, currently constructing a state-of-the-art LNG facility near Jacksonville. While the Isla Bella and Perla del Caribe have safely bunkered LNG through a truck-to-ship process since launch, the new facility – upon completion – will represent the first, small-scale coastal LNG facility in North America that offers ship-to-ship and barge-to-ship bunkering.

MAN Energy Solutions successful ME-GI (-Gas Injection) engine has set a new industrial standard for two-stroke propulsion engines aboard – among others – LNG carriers, container vessels, car carriers and bulk carriers. The ME-GI engine provides ship-owners and operators with a peerless solution within environmentally friendly and high-efficiency, two-stroke technology, without the greenhouse emissions such as methane slip, which is a hallmark of competing engines.

With the ME-GI engine, two-stroke development has taken a step further by combining the unique properties of multi-fuel combustion and the well-known reliability of MAN Energy Solutions ME-engine. The Diesel principle provides the ME-GI engine with high operational stability and efficiency, including during load changes and fuel change-over, while defining properties such as a stable change-over from fuel to gas with no fuel-penalties are maintained. The ME-GI engine is the most environmentally friendly, technology available within the two-stroke engine segment.